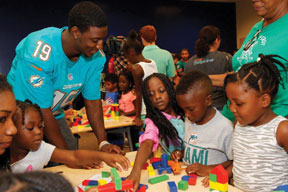 The Most Valuable Reader Program is a partnership with Miami Dade and Broward county libraries. The program has almost 100 libraries participating, where each library creates a game board that encourages students to read. With each completed book, they can move through the game board and be entered to win prizes along the way.

Those completing the entire game board are entered into a drawing to win one of several grand prizes provided by the libraries and the Miami Dolphins.