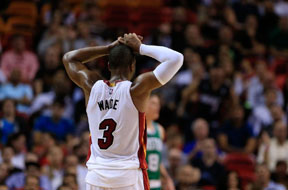 Mar 9, 2015; Miami, FL, USA; Miami Heat guard Dwyane Wade (3) reacts in the second half of a game against the Boston Celtics at American Airlines Arena.

Among the qualities often embodied by athletes – dedication, intensity and that favorite of all general managers, “grit” – perhaps the one that they possess least is self-awareness. Trained from adolescence to push through normal boundaries, they live in an insular world, a bubble of their own creation fed by success, power and wealth.

Sometimes, when it’s least expected, that bubble bursts, as it surely has for Dwyane Wade.

The NBA free agency period is still in its infancy, merely rumors and educated guesswork, linking said player to said team. Everyone is hopeful, from the most casual fan to the most experienced front office staffer, that they can land that marquee name to lead a team to the promised land of a championship.

The players, too, are enthusiastic. They expect to be compensated for both their most-recent accomplishments and a lifetime of hard work. They enter free agency as almost every employee does after a performance evaluation. But sometimes instead of a raise, they just take your red Swingline stapler:

That’s apparently the case for Wade, embroiled in contract negotiations with the Miami Heat that range from contentions to overblown, depending on who you ask. Wade might have been disappointed in an offer by Heat president Pat Riley (rumored to be in the vicinity of three years at $10 million per). Or he might simply want more than he was set to make this upcoming season (he opted out of a contract that was worth $16.1 million). The details are vague.

The truth is that he’s currently unemployed and looking for work, and he expected a number of teams to be calling for his services. But his phone isn’t exactly blowing up, as reported by ESPN’s Chris Broussard on Tuesday:

And this summary of the situation, from Sheridan Hoops, punctuates the risk Wade took very succinctly:

When healthy, Wade remains a force. After all, he trailed only LeBron James and Kyrie Irving in the East’s scoring race this past season. But that “when healthy” is a major caveat, and it remains to be seen whether any team would commit to him on a three-year deal for major money, as he desires…Wade’s starpower could help sell tickets with the Knicks and Lakers, but are those rebuilding clubs best served to use their cap space on an aging player with significant health risk?

The odds are that Wade remains in Miami, where he’s been for his entire career. But his saga could go on for some time, because it doesn’t seem like the market is going to give him the leverage he desires.

It’s hard to accept that reality that you might not be that marquee name any more, nor are as highly-sought as you expected to be. Players often refer to the privilege of getting to retire on their “own terms,” not forced out by injury or because you’re just not wanted any more. The consequences aren’t quite that dire for Wade, obviously, nor should they be. He’s still a top scorer in the league and capable, in stretches, of being as dominant as ever.

But those stretches aren’t as often as they used to be and he won’t be getting a max-level contract, as Broussard suggests, for occasionally being great.

The harsh truth can send a person reeling but, in Wade’s case, it’s likely to serve as a wake-up call. And the rest of the league better watch out.

Longtime Heat fans know that Wade has lapses. He’s not always engaged. He doesn’t always get back on defense. Sometimes he just looks, as is expected over the course of a long season, a little disconnected. But he’s always played better than usual when he’s angry, after drawing a hard foul or being slighted in some way. Wade isn’t a person you want to piss off on the basketball court and the league’s “disrespect” (whether real of just imagined) is the kind of motivation that a 33-year-old needs at this point in his career.

He’s lost the excess weight he never could during Miami’s “Big 33 era. He’s not nursing any lingering injuries this offseason.

He’s refreshed after four straight years of going to the NBA Finals.

And, when he resigns with Miami as is largely expected, he’ll be motivated to prove that he’s as valuable – and dangerous – as ever before.

Miami Heat: On To the Next Round Thanks to Goran Dragic

Who needs a Tyler Perry Production when you have the Miami Heat? For the three-time NBA championship franchise Miami Heat the playoffs have been nothing short of dramatic. We’ve been accustomed to the first round […]

“LeBron is tired. LeBron is tired.” That’s all you heard in the fourth quarter when the Miami Heat were putting a 20 point beatdown on the Cleveland Cavaliers inside of the Amercian Airlines Arena. Ironically […]

Guess they listened. Last week we said, the Miami Heat were at a crossroad. This week, the Heat have walked through, made dinner, killed a lion and then did it again, all while walking left […]