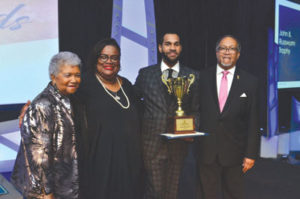 Karen Carter Richards, the first vice chair of the National Newspaper Publishers Association (NNPA) and publisher of the Houston Forward Times, received the highly-coveted Publish of the Year Award during the 2018 NNPA Foundation Merit Awards in Norfolk, Va.

Richards, who remained in Houston recovering from an illness, was represented by her associate editor, Jeffrey L. Boney.

During an earlier interview, Richards expressed her undying appreciation for the Black Press.

“The Black Press has always been and will continue to be relevant. We are the voice, the true voice of our people,” Carter Richards said. “We have recorded our history for 191 years like no other media could ever do. We have recorded many stories…our celebrations, our injustices and those hidden, treasured stories that came from our communities that we have always found value in.”

The NNPA Foundation also presented 21 scholarships that were funded by sponsors that included Ford, General Motors and Coca-Cola.

“We are all winners even if you didn’t hear your named call,” said Amelia Ashley-Ward, NNPA Foundation Chair and publisher of the San Francisco Sun-Reporter. “When one of us wins, we all wins.”

For the 2018 Merit Awards, publishers were independently judged in 20 different journalistic categories and Ashley-Ward said it’s all part of the Foundation’s goal of continuing to deliver on its vision to preserve the historical legacy of the Black Press while expanding its reach and impact in the United States and abroad through technology and innovation in today’s marketplace.

Following the awards presentation, Macy’s hosted an after party where publishers, writers, sponsors and others enjoyed cocktails and live entertainment.

The theme of the 2018 convention was “Celebrating 191 Years of the Black Press in America: Sustaining, Engaging and Mobilizing Black Communities.”

“Since the first publication of Freedom’s Journal in 1827, the Black Press has remained on the frontlines of reporting and distributing the news, achievements, challenges, aspirations and ongoing advances in the cause and mission of sustainable development and progress for African Americans and all others who cry out for freedom and justice,” said NNPA President and CEO Dr. Benjamin F. Chavis, Jr.

Brenda H. Andrews, the publisher of the New Journal and Guide and host of this year’s convention, said that the Black Press lends an authentic and needed voice to the issues and concerns of continuing racial economic, income and health disparities. The Black Press also highlights the need for quality education for children, who live in inner city and rural communities and are often forgotten.

Andrews said the high mass incarceration rate of people of color and other vital quality of life challenges are highlighted each week on the pages of the Black Press.

“We also offer those feel good stories that enhances our communities’ esteem about who we are, as people of color,” Andrews said.