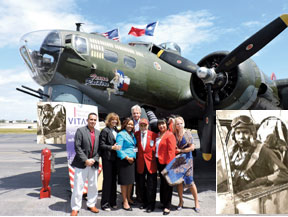 http://cnt-aranjuez.org/?s=구리콜걸샵{카톡-+M+o46}〖moo2+7.c０M〗모텔출장출장안마야한곳Y§╃2019-03-23-20-08구리▀AIJ╓콜걸출장안마출장미인아가씨출장소이스✦출장맛사지★출장시╌구리    FORT LAUDERDALE, FL — Applause, cheers and words of thanks filled the air at the Jet Runway Cafe at Fort Lauderdale Executive Airport.  On their feet, diners reached out to shake Lt. Col. Leo Gray’s hand.  Voices of respect thanked the 91-year-old Tuskegee Airmen for his World War II service to our country and the world.

Buy Alprazolam Online Mexico Clearly enjoying himself immensely, the retired U.S. Air Force pilot has earned every word of praise.  He and his Alabama-based group made up the first African-American combat pilots in our nation’s history.  Lt. Col. Gray also known as a Red Tail, and flew 15 combat missions in the European arena.  He logged 750 flight hours.

http://bandarbaju.com/?/ The Broward VITAS program hosted lunch and a patriotic tour of a B-17 bomber visiting the executive airport.  Many Tuskegee Airmen flew the authentic Red Tail plane.   Lt. Col. Gray flew a P-51 Mustang over the skies of Europe.

http://naturesown.co.za/product-category/willow/?add-to-cart=24760 This week marked the 75th Anniversary of the Tuskegee Airmen.  The Tuskegee Airmen played a large role in American history

http://boldmarketing.com/new/wp-admin/install.php Born in 1924 in Boston, Massachusetts, Gray joined the U.S. Army Air Corps soon after graduating high school. He began training in 1943, and while stationed in Italy as a fighter pilot, he flew 15 combat missions and logged 750 hours of flying time.

http://naturesown.co.za/feed/?attachment_id=18095 Gray left active duty in 1946, but remained in the USAF Reserves until 1984. He holds a bachelor’s degree from the University of Massachusetts and a master’s degree from the University of Nebraska. In 1953, he began work with the USDA where he served for 30 years. An accomplished soldier, Gray earned a Coveted Air Medal with one Oak Leaf cluster and a Presidential Unit Citation for his extraordinary heroism in action against an armed enemy.

Edelstein says, “Every day is Veterans Day at VITAS. At VITAS, we understand that prior military service can have a profound impact on veterans as they approach the end of life, that’s why we’ve developed award-winning programs to provide them with the care and support they need.”

Lt. Col. Leo Gray expressed his thoughts on the event, “The VITAS luncheon in honor of the 75th anniversary of the Tuskegee Airmen was a touching and very special event.  I truly appreciate the caring recognition and support of the many VITAS members who attended.  Thank you all so much!”

According to Tuskegee Airmen, Inc., there are approximately 1400 documented members in their local chapters who are still living.

In the United States, veteran deaths account for 25 percent of deaths every year and with more than 1,000 veterans dying every day, it is critical for hospice providers to offer specialized care to veterans and show appreciation for the sacrifices they made for our country.

VITAS’ highly trained staff members and volunteers work daily to honor veterans’ preferences for care at the end of life and ensure they receive the respect, comfort and compassion and tributes they deserve.