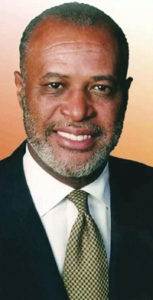 The Carlton B Moore Freedom Foundation, Inc. awarded three high school seniors with scholarships to assist them with furthering their college/university educations.  This is the Foundation’s fifth year of awarding scholarships to our local youths.

The following Dillard High School seniors each received a $1,000 scholarship: Deiondray Collins plans to attend Florida Memorial University in Miami, Fla. He will major in Criminal Justice.  His mother is Ms. Sabrina Collins.

Jasmine Williams plans to attend either the Honors College at Broward College in Fort Lauderdale, Fla.  or Florida Agricultural and Mechanical University, in Tallahassee, Fla. She will major in Biology. Her parents are Mr. and Mrs. Jeffrey Williams.

The memorial scholarship is named in honor of Carlton B. Moore, who served as a  City of Fort Lauderdale Commissioner for more than 20 years. His favorite saying was, “When wishing won’t, work will”. Mr. Moore attended Dillard High School and graduated from Fort Lauderdale High School. He also served as president of the Fort Lauderdale Chapter of the NAACP. He was the recipient of many awards. Moore was an advocate for change and revitalization, especially for the Northwest corridor. He loved music, especially jazz, and traveling.

For further information, feel free to contact us at Carltonbmoorefreedom
foundation@yahoo.com.