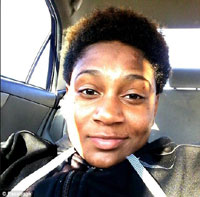 Three people were killed in a workplace shooting Thursday morning in northeast Maryland. Several other people were wounded during the attack at a Rite Aid distribution center.

The shooter, identified by the sheriff as Snochia Moseley, 26, of Baltimore County, also died; she shot herself in the head.

Harford County Sheriff Jeffrey Gahler told a news conference, “It appears to be a single weapon that was used, a single handgun. … We do not believe that there is an additional threat anywhere to our Harford County community.”

A law enforcement source told Reuters that officials think the shooting may have been tied to a work-related grievance.

Christiana Care Health System spokesman Hiran Ratnayake said one person injured in the shooting was being treated at Christiana Hospital in Newark, Del. Ratnayake said the person was in serious condition.

Reports came in at about 9:06 a.m. from the distribution center that shots were being fired.

Maryland’s Gov. Larry Hogan tweeted Thursday morning that law enforcement was on the scene. “We are closely monitoring the horrific shooting in Aberdeen,” Hogan wrote. “Our prayers are with all those impacted, including our first responders. The State stands ready to offer any support.”

No shots were fired by law enforcement officers on the scene, the sheriff said.

“Unfortunately in today’s world we have active shooter … drills,” Harford County Chief Executive Barry Glassman told the news conference. “And I can tell you, and tell our Harford County citizens, that every agency performed at the top of their profession, and the response from all our allied agencies was great.”

Last year, three were killed and two injured in a shooting at a kitchen countertop company in Edgewood, Md., 11 miles from Thursday morning’s attack.

The Capital Gazette reports that Thursday’s shooting in Aberdeen is the third workplace shooting in the U.S. in 24 hours:

“Four people were shot around 10:30 a.m. Wednesday at a software company, WTS Paradigm, in Middleton, Wisc., by a 43-year-old co-worker, police said. The gunman was shot and killed by police. Three of the injured were in serious condition as of Thursday morning, one suffered a graze wound.

“Then, around 2 p.m., four people including a police officer were shot after a man opened fire outside a judge’s office in a municipal building in Masontown, Penn. The suspect, Patrick Dowdell, 61, was shot and killed by police. Dowdell had a preliminary hearing scheduled for Wednesday on domestic charges of strangulation, aggravated assault and terroristic threats from an incident several weeks ago.”

Glassman, the county chief executive, said Thursday that shootings are “becoming a too often occurrence, not only in Harford County, but in the country.”