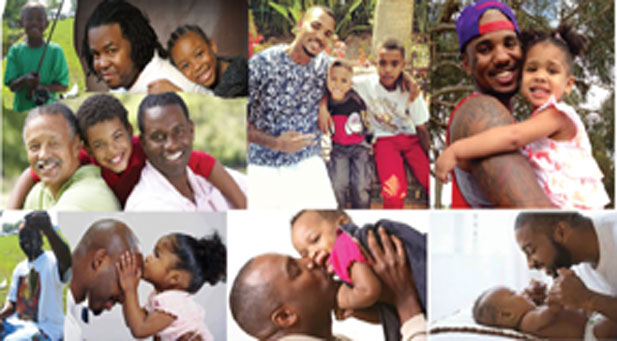 Among fathers who resided with their kids, African American dads were more involved in their children’s lives.

In the survey, fathers rated how often they performed certain activities with any or all of their children over the previous four weeks. Black fathers were most likely to bathe, dress, diaper, or help their children use the toilet on a daily basis. This was true for 70 percent of Black dads who lived with their children, compared with 60 percent of white dads and 45 per-cent of Latino dads.

Although few fathers outside the home could say they did this every day (across race), but Black dads were the top hygiene helpers (12 percent, compared to 6 percent for whites and 7 percent for Latinos).

According to a similar report from the Pew Research Center, 62 percent of all Black fathers read to their children at least several times per week. Black dads in the CDC survey who didn’t live with their children were more than twice as likely as their white counterparts to host story time every day.

These same “absent” Black dads were significantly the most likely to talk to their school-age children about their day – more than 50 percent reported having done so several times per week or more, compared to 34 percent of absent white dads and 23 percent of absent Latino fathers.

But critics from President Obama on the left to Fox News on the right have been unstinting in their criticism of Black males absent from the home. However, their criticism invariably overlooks the extent of their involvement revealed by the CDC report.

As recently as last week, President Obama defended what some consider his talking down to Black audiences.

At a panel discussion on poverty at Georgetown University, Obama said: “It’s true that if I’m giving a commencement at Morehouse [College] that I will have a conversation with young Black men about taking responsibility as fathers that I probably will not have with the women of Barnard.  And I make no apologies for that.  And the reason is because I am a Black man who grew up without a father and I know the cost that I paid for that.”

According to CDC, Black patriarchs are the likeliest of all men to be stay-at-home dads (13 percent of Black dads who live with their children are), while 29 percent of Black fathers are single heads of their households.

Black marriage (or a lack thereof) is closely related to the absent Black father story, and it too brings its own misconceptions. It is true that Black families are least likely of all races to be led by a married couple; Pew data asserts that 72 percent of Black fathers have a child or children out of wedlock, and only 36 percent are married to the mother of their children. Cohabitation, co-parenting, single parenting, and blended or extended families have always been more common in the Black community than among other races.

But in the CDC study, cohabiting and single fathers of all races either outperformed or held their own in raising their children when compared to married fathers. The data suggests that cohabitation or co-parenting isn’t necessarily a weaker family structure, nor does it necessarily result in poor paternal involvement.

“While more than one-quarter (27 percent) of fathers are living apart from their children 18 or younger, there is a huge variation in the type of involvement that these – non-co-resident fathers have with their children,” a 2011 Pew report reads.

“On one end of the spectrum, almost one-fifth (18 percent) report only occasional contacts with their children, and no visits in over a year. At the other end of the spectrum are the 14 percent of fathers who live apart from their children but report still seeing them several times a week, and talking with or emailing them several times a week, as well.”

The percentage of kids living apart from their fathers has more than doubled in the past 50 years, according to Pew, but absent no longer means uninvolved. And in some cases, absent Black fathers are the most involved of all.

Even Obama has sounded a note of optimism, saying at Georgetown: “And I also know that I have the capacity to break that cycle, and as a consequence, I think my daughters are better off.  And that is not something that — for me to have that conversation does not negate my conversation about the need for early childhood education, or the need for job training, or the need for greater investment in infrastructure, or jobs in low-income communities.”

Jazz sensation to perform at NNPA Conference in June

For more than 17 years, Nicole Henry has been singing and performing in front of fans, friends, family and industry leaders. […]