The NBA, NHL, WNBA, MLS, MLB and NFL all think they’ll make it through this in time to salvage their seasons. I desperately hope they are right. 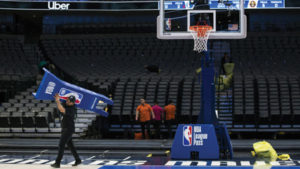 — ignoring my pleas about social distancing (boomers!) — were at that game, between the St. Louis Cardinals and the Miami Marlins in Jupiter, Florida, drinking Bud Lights and eating hot dogs like everything was normal and fine. And my son and I watched the last pitch, a strikeout by Cardinals reliever Giovanny Gallegos, on television, miles away, knowing it’d be the last strikeout we’d be seeing for a while. Professional athletics is a billion-dollar global industry, but it has proved no match for the coronavirus pandemic.

Professional athletics is a billion-dollar global industry, but it has proved no match for the coronavirus pandemic.

This weekend was supposed to be one of American sports’ busiest with golf, tennis, the NBA, the NHL, MLS and dozens of spring collegiate sports leading up to the grand drama and madness that is the NCAA basketball tournament. Instead, March Madness is canceled and ESPN is already airing old games on a loop. It’s a dark time for sports fans, who have become accustomed to having sports available every single day of the year. It is bizarre and disorienting for them to be gone. My son and I have taken to watching the computer play itself on the video game “MLB: The Show 20.” He hasn’t started putting wagers on the games yet but give him time.

The leagues and the executives of the sports world have done their best to stay calm and let us know that they will be back soon. But if you’ll forgive the fatalism here — and note that I have been staring at this video game for a very long time — I do not believe them. I think we are in for many, many more weekends like this one, something that’s even more clear in the wake of the Centers for Disease Control and Prevention’s recommendation Sunday night for no events with more than 50 people for the next eight weeks.

The problem is sports are simply not built to withstand extended delays. The schedule is too tight and too reliant on its reliability and regularity. The NFL just announced its new schedule (starting in 2021) will include an extra game. These sports leagues have had their structures and routines in place for decades, and they tend to run like clockwork. When one spring breaks loose, it can be hard, if I can mix the metaphor, to get the trains back running on time. Taking one week out of any sport’s calendar messes the whole machine up. Taking one month, or two, or three, could break the whole thing down. Every delay cascades. Time passes exponentially. Until it’s gone.

NBA Commissioner Adam Silver has probably shown more leadership than the federal government; a good argument could be made that his decision to suspend the NBA season after Utah Jazz center Rudy Gobert tested positive for the virus was the first time much of America started taking this situation seriously. Silver’s decision happened days before President Donald Trump declared a national emergency.

But even Silver’s initial proclamation, that the NBA would be out for 30 days, is looking increasingly unlikely to stand. As pointed out by The Athletic’s John Hollinger, the Chinese Basketball League paused its season back on Feb. 1 and, now that the situation in that country has stabilized, is hopeful to resume in early April. But that is widely considered unlikely. When you consider how much more quickly China reacted once the virus began to spread — after the initial cover-up, of course — then even two months starts to seem wildly optimistic in the United States.

The same goes for Major League Baseball. MLB was even more ambitious, with the commissioner saying the sport would be out for “at least” two weeks. But even if some sort of magic wand could make all the coronavirus in the world go away this exact second, it’s difficult to see how that would be possible. MLB has already, in conjunction with the players union, told players that their spring training clubhouses and facilities will be open for them during this time but that they can also leave and go back to their families if they wish. Baseball spring training is long already in large part because players, particularly pitchers, have very specific programs in place to gear them (and their fragile arms) up for a long season.

To restart that process will require a week, at least, just to get everybody’s schedules aligned, before they even start training again. (If anything, MLB is pushing players to leave, not stay; it’s the players who insist on sticking around.) And of course, we’re actually just getting started with the coronavirus. Whenever it’s clear to come out again, baseball’s spring session will have to essentially start over.

There are estimates that in Italy, the current quarantine could last to the end of this month or even much longer. If the virus can’t be contained even with quarantines and isn’t (as is so often hoped) burned off by the summer heat, large public gatherings will surely be discouraged even after city or national quarantine orders are lifted. In this scenario, how could MLB start having games with, or even without, fans before July? If the NBA season is out that long, it’s difficult to see how it could continue in time, considering the season usually ends in June; would baseball, which is usually at its halfway point and the All-Star break at that time, even have time to start?

And that’s not the worst case, either. If the coronavirus leads to a breakdown in our health care system (or something even worse), this could last deep into the fall, or much longer. We are less than six months from the start of football season, and less than five months from training camps. Are we sure this is going to be over in five months?

We want to hear what you THINK. Please submit a letter to the editor.

I am telling my son, and my parents, and myself, that sports are gone only for a while, that they’ll back before I know it. But I think I’m kidding myself. The NBA, NHL, WNBA, MLS, MLB and NFL all think they’ll make it through this in time to salvage their seasons. I desperately hope they are right. But time is running out. And we’re just starting this.

Will Leitch is a national correspondent for MLB, contributing editor at New York Magazine, host of “The Will Leitch Show” on Sports Illustrated and the founder of Deadspin.