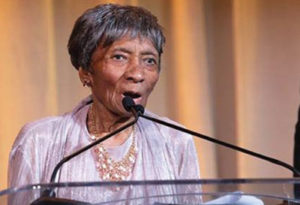 “We are here to recognize our brothers and sisters who are truly national leaders and who stand for freedom, justice and equality not when its popular, but when it’s not so popular to be freedom fighters,” said NNPA President and CEO Dr. Benjamin F. Chavis Jr.

“We are here to recognize our brothers and sisters who are truly national leaders and who stand for freedom, justice and equality not when its popular, but when it’s not so popular to be freedom fighters,” said NNPA President and CEO Dr. Benjamin F. Chavis Jr.

In her typical fiery but still eloquent way, Waters spoke passionately about she and other Democrats’ mission to impeach President Donald Trump – though, like all of the recipients, she never mentioned the president by name only referring to him as “Number 45.”

“My friend Jesse Jackson said if you fight, you can win. If you don’t fight, you will never know if you can win,” said Waters, who also took time to heap praise upon NNPA National Chairman Dorothy R. Leavell, the publisher of the Crusader newspapers in Gary, Indiana and Chicago.

For those who insist that Vice President Mike Pence might turn out as a worse Commander in Chief than Trump, Waters scoffed, “…I say knock off the first, and go after the second,” she said, as the sold-out crowd inside the grand ballroom of the Marriot Marquis roared its approval of her fiery award acceptance speech.

Green, the veteran civil rights advocate who’s serving his seventh term in Congress, picked up where Waters left off. “I promise that I have not given up on impeachment,” Green said. “We have a president who is not only unfit for the presidency, but a man who is unfit for any office in the United States of America.”

Clyburn, who arrived in Congress in 1993 and is the third-ranking Democrat, followed his colleagues and helped to drive home their impeachment argument. “I learned early what it means to challenge the system. I learned from my dad what it means to have the power of the almighty vote,” Clyburn said. “If the [midterm] election goes the way it seems like it is, you will have the best years of your lives going forward.”

Waters, Green and Clyburn were among the nine national leaders and activists honored by the NNPA on Friday, Sept. 14. A trade organization representing America’s more than 220 African American-owned newspapers — with more than 22 million weekly subscribers, the NNPA began the Leadership Awards in 2014. The awards honor individuals who are national leaders in their specific fields and whose actions have helped to improve the quality of life for African Americans and others.

The producers of the NNPA Leadership Awards Reception decided that the best time to host such an awards reception would be during the Congressional Black Caucus Foundation’s Annual Legislative Conference, a weeklong event that’s held each September.

The CBC ALC week is the largest annual gathering of its kind in the United States, featuring 15,000 to 20,000 African American leaders and influencers.

The underlying combined objective of the CBC ALC and the NNPA National Leadership Awards Reception is to network, collaborate and strategize collectively for the advancement and empowerment of Black America.

At 97, Wooten is the longest continuously serving poll worker in America. Immediately upon graduating from Princeton High School in 1939, Wooten was recruited to work the polls by her great uncle, Anderson Mitnaul, who was running for Justice of the Peace. More than seven decades later, Wooten is still working the polls and her 79-year streak remains intact.

“Voting is important,” Wooten told the audience who saluted her with a prolong standing ovation. “We need to engage young people to get out to vote. I hope we can do better this year. On November 6, get out and vote,” she said.

Dr. Martin Luther King, Jr.’s influence on the Civil Rights Movement is indisputable, but his fight for equity in education remains a mystery to some.

In many cases women officers’ perspectives have been silenced pertaining to violence and their contributions to the changing landscape of this country have been nonexistent. […]