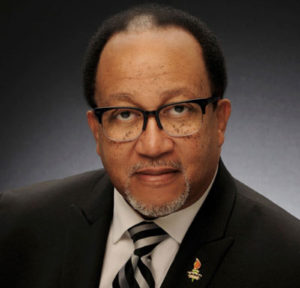 NNPA President and CEO Dr. Benjamin Chavis, Jr. said that Democrats and Republicans must advertise in the Black Press to reach that crucial voting bloc. (NNPA)

The NNPA is a trade group that represents over 200 Black-owned media companies that reach more than 20 million readers, combined, in print and online, every week.

The campaign will focus on an aggressive voter registration drive, community-level education on important issues, and a mobilization effort—all designed to reach young, Black eligible voters.

North Carolina, Texas and Florida are important states that could change the makeup of the United States Congress, if the Black vote flexes its muscle. The Black Press is considered essential in those states to mobilize that electoral strength.

Primaries in North Carolina are scheduled for May 8.

The Black Press in North Carolina and in other states will play a powerful role in educating Black voters about political candidates across the country and mobilizing those Black voters to go to the polls.

As the power of the Black vote continues to rise, and with billions—not millions—of dollars projected to be spent on advertising, during the 2018 midterm elections, Dr. Chavis said that Democrats and Republicans must advertise in the Black Press to reach that crucial voting bloc.

Unfortunately, both the Democratic and Republican parties have traditionally proven to be sorely lacking when it comes to advertising in the Black Press.

Despite clear evidence that African Americans are their most loyal voters, the Democrats, have been accused of taking the Black vote for granted. Meanwhile, others have said that Republican candidates seem to ignore the Black community entirely.

NCBPA publishers agree that the political parties must be challenged, immediately, while advertising budget decisions are being made.

Dr. Chavis, a North Carolina native, said that the get-out-the-vote (GOTV) strategy should be “data driven” for all the state’s 100 counties. He noted that each of North Carolina’s African American newspapers together cover the entire state, and once the pertinent voting data is obtained, a campaign should be developed around it. The campaign should be featured prominently across social media platforms and Black celebrities should also be enlisted to spread the word.

“In our plan, we should have coverage of the whole state—all 100 counties,” Dr. Chavis said, adding that the effort should, “especially target African Americans, who are eligible to vote, but are not registered…in 2018.”

Dr. Chavis said that he’s seen figures from 2012 that the number of eligible, unregistered Blacks in North Carolina was between 400,000–500,000. He said that figure is most likely higher now, because of voter suppression, and the purging of state voter rolls.

From now until September, Dr. Chavis said that voter registration must be emphasized. Then from September to November 4, GOTV must take center-stage.

Part of the plan is to identify 20 North Carolina cities where the NNPA-CashWorks HD Productions 2014 award-winning film, “Pardons of Innocence: the Wilmington Ten,” can be screened in concert with a locally-coordinated voter registration drive.

Dr. Chavis, who is recognized as the leader of the “Wilmington Ten”—10 civil rights activists falsely convicted of arson and imprisoned in the 1971 for the destruction of a White-owned grocery store during the height of racial unrest in the city—would accompany the film to speak with audiences about the importance of voting and citizenship.

Mary Alice Thatch, the publisher of “The Wilmington Journal” and the president of the NCBPA, said that the film was successfully screened in Lumberton, N.C., in March, to over 400 people from there and surrounding counties.

“We want to recreate that spirit in 20 locations between now and November,” Thatch said, adding that the “GOTV initiative should also focus on rural communities.”

Helping the community to understand that “empowerment through voting” is the key, Dr. Chavis said. Directing young people to register online via “Rock the Vote,” in part to eliminate the normal complications to voter registration, is also another strategy that should be implemented.

“We should make voter registration easy [for young people], not hard,” Chavis said.

“We’re going to have to develop an agenda to get young people to vote,” Thatch said, focusing on issues like police brutality, poverty, the achievement gap, better employment and small business opportunities. Additionally, economic development in the Black community should also be emphasized, as an important outgrowth of voting.”

In the meantime, the Black Press should continue to report about the value of the African American vote in their papers.

“We can’t expect other people to value us more than we do,” Dr. Chavis cautioned, adding that he was willing to come back to North Carolina to help formulate the plan.

Four of the NCBPA newspapers—The Carolina Call, The Urban News, The Daily Drum and The Fayetteville Press—plan to apply for membership to the National Newspaper Publishers Association.

Rep. Maxine Waters Pushes Back Hard Against Unsubstantiated “News” From the Right

“Lies, lies, and more despicable lies. I am utterly disgusted by the spread of the completely false, absurd, and dangerous lies and conspiracy theories that are being peddled by ultra-right-wing pundits, outlets, and websites who are promoting a fraudulent claim that a member of my staff was responsible for the release of the personal information of Members of the United States Senate on Wikipedia […]