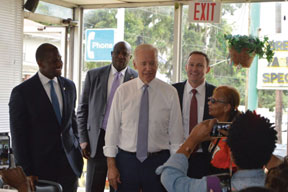 Obama, Biden pull out all stops for Patrick Murphy for U.S. Senate

As President Barak Obama and Democrats concentrate on taking control of the US Senate, they place Patrick Murphy high on the list of candidates to make that happen. For President Obama, a Democratic majority in the Senate is critical to preserving his legacy. The President has endorsed Murphy who is taking his message to voters the old fashioned way by reaching out: Murphy enjoys the fellowship of getting to know people in their communities throughout the Sunshine State.

While President Obama confirms his support for Murphy in television ads, Vice President Joe Biden is often on the campaign trail with the Congressman.

Crisscrossing the state together they have visited Jackson Soul Food in Miami, Chef Eddie’s Restaurant in Orlando, and at Olean’s Café in Tallahassee.

“It’s the honor of a lifetime to campaign with Vice President Biden,” said Murphy. “I’m thrilled to have the support of Florida Democrats from Democrats across the country — including President Obama.”

In the television ads, President Obama encourages Floridians to support Murphy for U.S. Senate saying, “I count on Patrick Murphy. You can, too.”

The President also campaigned for Murphy in June and recorded a radio ad telling Florida voters, “I need Patrick Murphy in the Senate.”

Vice President Biden has been similarly described Murphy as “the real deal” and a “raw talent.”

It isn’t hard to figure out why Obama and Biden are backing Murphy’s Senate campaign. Murphy has been a reliable ally for President Obama in Congress, from supporting the Affordable Care Act and the President’s Climate Action Plan, to working to protect a woman’s right to choose and defending Social Security and Medicare.

Murphy has campaigned hard to fix our criminal justice system and immigration re-form, which are priorities he shares with the President.

“I’m proud to be standing up to defend President Obama’s legacy,” said Murphy. “It’s a humbling responsibility, too. We have achieved so much in the last eight years from passing the Affordable Care Act to raising the minimum wage for mil-lions of federal workers. In the Senate, I promise to build on that progress.”

Obama at Newtown vigil: ‘God has called them all home’

The president spoke at a vigil for the victims of the Sandy Hook Elementary School shooting in Newtown, Connecticut

Thousands line up to see Obama in Hollywood

Thousands of people lined up to see President Barack Obama at McArthur High School on Sunday morning. The line extended about 10 city blocks about mid-day Sunday. Obama was expected to speak about 12:30 p.m., […]