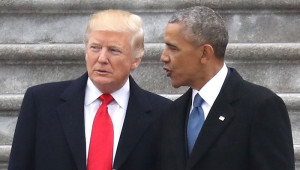 By Susan Johnes Photo via CNBC

Former President Barack Obama has reminded the current President that he is not the “commander of Twitter.”

Mr. Obama offered a bit of advice to politicians, notably Donald Trump, on how best to use social media responsibly.

While speaking at the Hindustan Times Leadership Summit in New Delhi, India; Obama spoke on the power that social media has as a transformative tool and one that can be used to shape a global message.

Obama also had some words for politicians who have been under looking the power of social media. “Think before you tweet,” Obama said, apparently referring to President Donald Trump.

“Look, I have got 100 million Twitter followers,” Obama continued. “I have more than other people who use it more often.”

Keep it in mind that Trump’s Twitter account has just over 43 million followers. Obama also brought to light Trump’s infamous typos, saying that he (Obama) likes to spellcheck and use proper punctuation when he posts on social media.

“My daughters think it is odd,” Obama said. “They always explain to us how if you put a period at the end of a sentence it sounds harsh…”

While Obama never called out the president by name, he did invite people to examine themselves when confronted with politicians that they disagreed and disapproved.

“If you see a politician doing questionable things, as a citizen you must ask yourself, ‘am I encouraging, or supporting the values I’m hearing out of the politician?’” he said. “Politicians tend to be more of a mirror and more of a reflection of forces in the society.”

Back in August, Mr. Obama made Twitter history by gaining more than three million likes after his tweet that quoted former South African President, Nelson Mandela, following the violent clash and domestic terror after white supremacists descended on Charlottesville, Virginia.

Obama said, “No one is born hating another person because of the color of his skin or his background or his religion…”

Michelle Obama has also previously spoken about the power of sharing your voice on the social media. “When you have a voice, you just can’t use it anyhow,” she said. “You don’t have to say what’s on your mind. You don’t tweet every thought.”

Her comments sent the audience into an uproar of laughter because the apparent shade was thrown to President Donald Trump.

It’s up to us to make America great again

It’s up to us to make America great again

The DNC is a Ball of Confusion

Hillary appears to be out of the picture – at last! With that being the case, then who is in contention for the presidential nomination in 2020? Who is going to stand up face to face with President Donald Trump? Right now, we have over two dozen contestants to consider. Some are vague and not well known and others are hangers-on that are approaching 80 years in age. […]