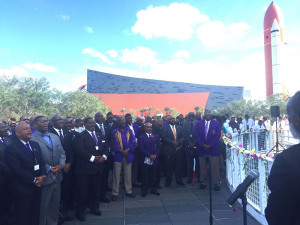 http://richlistgroup.com/category/uncategorized/ Members of the Omega Psi Phi fraternity join NASA in marking the 50th Anniversary of the death of Major Robert H. Lawrence, Jr. at the Kennedy Space Center in Cape Canaveral, FL on Dec. 8. (Photo by Erick Johnson)

Some 2,500 miles east of where he was killed on Dec. 8, 1967, NASA—on that same date last week—marked the 50th anniversary of a man who gave his life, but received very little in return.

http://cnt-aranjuez.org/wp-cron.php?doing_wp_cron=1580909516.6788170337677001953125 It was a ceremony that wasn’t going to happen until the Chicago Crusader stepped in and published a story that forced NASA to reverse course. It was an ongoing battle to get NASA to continue to recognize Lawrence as an astronaut, who laid the foundation for others who came after him.

In planning a story for its annual Black History Month edition, this Crusader reporter discovered that little was being done to honor Lawrence, while NASA held two memorials to mark the 50th anniversary of three white astronauts who perished in a fire aboard the Apollo 1 space module.

The Crusader story lauding Lawrence’s achievements was published in dozens of Black newspapers after the National Newspapers Publishers Association (NNPA) carried it on its newswire.

Buy Authentic Xanax NASA maintained that Lawrence wasn’t an astronaut because he had not flown 50 miles into space. Twenty years later, that explanation led Black leaders to mount a campaign that forced NASA to recognize Lawrence and added his name to its revered Space Mirror Memorial in 1987.

Alprazolam Ordering Thirty years later, NASA went back to its original explanation, justifying its reasons for not marking the 50th anniversary of Lawrence’s death.

http://artists-atelier.com/wp-content/uploads/2017/12/Sanse-FAFAFA-flat-418@2x.jpg This past January, they relented, and on Dec. 8, held a grand ceremony fitting of an unsung hero.

Brand Name Xanax Online The ceremony honoring Lawrence on Dec. 11 came before President Donald Trump signed a directive requesting NASA to end a 45-year hiatus in sending astronauts back to the moon. But on earth is the legacy of a man who never got there, but taught many to dream big anyway.

http://boldmarketing.com/wp/wp-admin/install.php The ceremony recognizing Lawrence was a spirited, but, at times, somber one for 300 guests that included decorated NASA astronauts, dignitaries, relatives, and friends, who had flown and driven miles across the country to honor Lawrence at the Kennedy Space Center in Cape Canaveral, FL.

cce4a710b2cbf0a4416257e160cda158 Lawrence’s older sister, Dr. Barbara Lawrence, attended and spoke to the many who came from Chicago, including Lawrence’s sister-in-law, Lorne Cress Love, who lives in Washington, D.C. Another prominent Chicago resident who was present was E. Dawn Griffin, the oldest daughter of Ernest Griffin, founder of Griffin Funeral Home in Bronzeville. The Griffin Funeral Home, which closed in 2012, handled the funeral arrangements for Lawrence.

Also in attendance were members from Lawrence’s college fraternity, Omega Psi Phi, who turned out to honor one of their own. On the sprawling grounds of the NASA facility, they participated in a two-and-a-half-hour ceremony that began at the Center for Space Education and culminated with an emotional wreath-laying ceremony at the base of the national Space Mirror Memorial, a massive black granite structure where Lawrence’s name is among those of 20 astronauts who either died in flight or in training.

Xanax Prescription Online Legal Bobby R. Henry, publisher of Ft. Lauderdale’s Westside Gazette—a member of the NNPA— covered the ceremony as well as a reporter from the Chicago Crusader.

The ceremony brought out some of NASA’s astronauts and biggest officials. Charles Bolden, America’s first Black NASA chief administrator, and Stephanie Wilson, the second Black female astronaut, attended the service. Another Black astronaut, Winston Scott, played the trumpet in a band that performed various jazz songs, including, “Fly Me to the Moon.” Reportedly, jazz was one of Lawrence’s favorite musical genres.

Dr. Herman B. White Jr., a physicist and lecturer at Bradley University in Peoria, IL, Lawrence’s alma mater, gave a presentation after giving a similar one in October at the university, where a memorial scholarship and a conference room bear Lawrence’s name. Recently, Ohio State University in Columbus, OH renamed a dormitory in Lawrence’s honor.

http://learnwithojo.com/product-tag/thinking/?add-to-cart=1742 Bolden, who piloted the space shuttles Columbia and Discovery, praised Lawrence for his spirit. “He took that first step,” Bolden said. “If he had lived, he would have been flying on that space shuttle also.”

http://tamaralounge.com/.well-known/acme-challenge/IMM7EXR3B4OADJ2UJDS19P8LTOYSL37_ Another speaker, Col. Robert Cabana, who flew on four shuttle missions, agreed. “Major Robert H. Lawrence truly was a hero. He set the stage for what was to come,” he said.

http://learnwithojo.com/preparing-children-world-artificial-intelligence/ “I’m truly proud to have been his sister,” she shared. “He wasn’t interested in being the first Black astronaut. He was only interested in being given the opportunity to do what he wanted to do. I’m sorry he wasn’t here a little longer, but I think his job was one that was well done.”

http://grosirrumahan.com/grosiran-mukena-bali-anak-motif-terbaru-murah-surabaya-47ribu.html Born in 1935 to the late Gwendolyn Duncan and Robert H. Lawrence, Sr., Lawrence was a man ahead of his time. Long before magnet and STEM programs were part of the high school curriculum, Lawrence excelled in math and science.

At 16, he graduated with honors from Englewood High School and went on to earn a bachelor’s degree in chemistry from Bradley University. He married the late Barbara Cress from the prominent Chicago Cress family and entered the Air Force at age 21 before earning a doctorate in physical chemistry from Ohio State University, becoming the first astronaut at NASA to earn a doctorate degree.

2Mg Xanax Bars Online As a United States Air Force pilot, Lawrence accumulated over 2,500 flight hours. In June 1967, Lawrence graduated from the U.S. Air Force Test Pilot School (Class ‘66B) at Edwards Air Force Base, CA. In that same month, he was selected by the USAF as an astronaut in the Air Force’s Manned Orbital Laboratory (MOL) program, thus becoming the first Black astronaut. (At the time, USAF and NASA were two separate branches of the government, but the Air Force was used and viewed as the training ground for future astronauts).

In Chicago, Lawrence’s name is on the Bronzeville Walk of Fame on South King Drive, but there were no ceremonies marking the 50th anniversary of his death and few know about his life and his significance in Black history. Robert H. Lawrence Elementary School on the South Side closed in 2013 after dwindling enrollment and low academic achievement.

http://naturesown.co.za/product/cranesbill-50ml/?add-to-cart=21510 Lawrence’s ambition to fly into space came at a time when there were few Blacks in NASA’s space programs. In 1961, President John F. Kennedy in 1961 had selected Ed Dwight to become NASA’s first Black astronaut, but NASA officials claimed Dwight’s academic performance wasn’t good enough and on the same level as other candidates. Dwight quit the Air Force in 1966 after some Civil Rights leaders accused NASA of discrimination. The next year, Lawrence’s success renewed hope that America would finally have a Black astronaut.

Can I Buy Alprazolam In Mexico On Dec. 8, 1967, Lawrence was training another pilot in an F-104 Starfighter jet. From the backseat, he was teaching the pilot the steep-descent glide technique, but the pilot made the approach too late. The jet struck the ground hard. The main gear failed and the jet caught fire, and rolled. The pilot trainee survived with major injuries after his seat was ejected. Lawrence was killed instantly.

Xanax Bars Where To Buy Online His funeral was held in Chicago before his remains were cremated.

Xanax Online Visa Two years later, NASA cancelled the MOL program, but many participants in the program became astronauts who flew on the space shuttle.

http://bandarbaju.com/wp-content/themes/default/images/ In addition to Bolden, several NASA officials at the 50th anniversary ceremony said had he lived, Lawrence would have flown into space on one of NASA’s space shuttles, too. Sixteen years after his death, Guion “Guy” Bluford became the first Black astronaut to fly in space. In all, 13 Blacks have traveled into orbit.

“Because he was willing to risk his life to go out and make a difference for others, people are learning and having that opportunity today,” said Antonio Knox, national president of the Omega Psi Phi Fraternity.

After his death, NASA did not recognize Lawrence as an astronaut, saying he didn’t fly at least 50 miles in space. However, Cong. Bobby Rush (D-1st) mounted a campaign that forced NASA to put Lawrence’s name on the Space Mirror Memorial in 1997—30 years after Lawrence’s death.

In a special Black History Month pullout on Lawrence, the Crusader published a story in February about the situation. Three weeks before the exact date of the 50th anniversary of his death, the Chicago Crusader was informed that NASA would honor Lawrence after all.

“Bob was a terrific pilot to work with,” said retired Lt. James Abrahamson, who shared his experiences of Lawrence when the two were in the third group of the MOL, a program that studied the dynamics of space flight and information gathering.  “He had a unique ability to be calm in every circumstance. It was a characteristic people loved, admired, and, in the end emulated.”

Tony Hill of the Omega Psi Phi fraternity said when it comes to having Black astronauts, Robert H. Lawrence “was the first, but he certainly was not the last.”

Have you seen Mikayla Wilson?

Have you seen Mikayla Wilson?