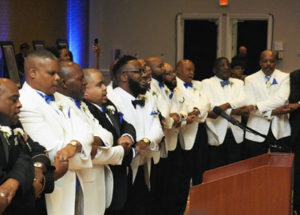 On Saturday, January 12, 2019, at the Rosen Centre Hotel, Orlando, Florida, the Phi Beta Sigma Fraternity Inc., (Gamma Delta Sigma Chapter), celebrated its 105 years of service at their “Founders Day Gala.” The most striking and beautiful image of the brotherhood is their Royal Blue jackets that leaves an indelible mark the first time the brothers are seen together.

3ce8abbfacad5e3b7261c1f42f8d8dd9 Phi Beta Sigma Fraternity Inc, was founded on January 9, 1914, at Howard University, Washington D.C., and has been changing lives through service for 105 years. The Gamma Delta Sigma chapter was started in the fall of 1951, and nine men were the charter members of the fraternity, and the last surviving charter member, James W. “Chief” Wilson, passed away December 5, 2018. The iconic Brother Wilson has been an instructor and Band Director for 40 years at Jones High School, and received numerous awards in his years of service. 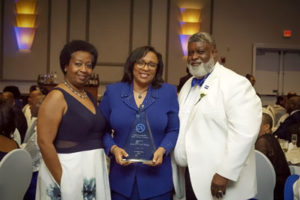 The Mistress of Ceremonies was Daralene Jones, an anchor and investigative reporter for Central Florida’s news station, WFTV Channel 9. Brother Gary P. Cobb is the President of the Gamma Delta Sigma Chapter, and at the beginning of the program he welcomed all his Brothers of Phi Beta Sigma, the Sisters of Zeta Phi Beta, Friends, Family, and Special guest. Throughout the entire program there was deep respect and love for all members of all Fraternities and Sororities attending the event.

Buy Discount Xanax Online Once the food was blessed by the Chapter Chaplin, Brother Art Whorley, the excellent meal was served and enjoyed by the attendees.

Purchase Alprazolam 2Mg Toward the end of the meal, Brother Lewis Nimmons received the Sigma Man of 2018 award, and Brother Allie Braswell received the Neophyte award (new Brother) of the 2018 year.

These brothers exemplify the hard work and sacrifice in the Fraternity Motto, “Culture for Service and Service for Humanity.”

The inaugural Phi awards were presented to Brother Ulysses Bryant, who joined the fraternity in 1956, because of his dedication to service in the community, and the Sigmas are about inclusion as opposed to exclusion. Brother Chief Wilson’s award was given to his family and the question is what has he not done to be a shining light in the community. He has been President of the chapter, active participant of Pan Hellenic Council, Sigma Man of the year numerous times, and Outstanding Sigma of the Southern Region Award.

http://orientafricatravel.com/?id=Best-Place-To-Buy-Alprazolam-Online There is no stronger power and force when Black men (Sigma Brothers) lock arms together and sing the Fraternity Hymn. “As a Sigma, it’s all about the inclusive ‘we,’ we embrace different walks of life, and we come with different visions.

Where there is a need, we try to fill that void. We try to make a positive impact as positive Black male role models in the greater Orlando community. We live by the motto “each one get one” and we broke a record this year by having 123 brothers on the rolls at the end of 2018,” says President Gary P Cobb Jr. What a phenomenal and exhilarating evening with the Phi Beta Sigma Brothers at their Founders Day Gala. The Orlando Zetas would like to congratulate our brothers on their 105th Founders’ Day Celebration, and I would also concur. “May you continue to uplift and build our communities with brotherhood and service. We are proud of all of your accomplishments and look forward to your future success,” says the Zeta Phi Beta Sorority, Inc. Epsilon Epsilon Zeta.

The Southern Region of Phi Beta Sigma Fraternity Inc. took over Freeport for the annual conference bringing in a much needed economic boost for the island. […]