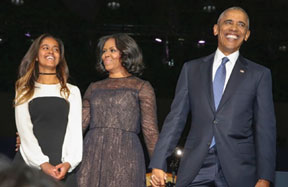 On Tuesday, January 10 the world set eyes on Chicago, and this time it wasn’t about the discussion of the latest homicide stats or a family member being lost violently to gunfire. This time is all about President Barack Obama returning to the town where his political career was birthed nearly 20 years ago.

The moment the announcement was made public of the president’s farewell speech, taking place in his hometown, the race was on and popping to snag a ticket to McCormick Place.

In a packed-out audience of 18,000, supporters waited as patiently as they did on Saturday, to again be a part of history. As he addressed a much smaller crowd than that fateful historical night of his presidential win on Nov. 4, 2008, in Grant Park, Tuesday night’s address drew hordes of media outlets from around the world.

Showing his stance on the importance of standing on our nation’s democracy, Obama said, “For 240 years, our nation’s call to citizenship has given work and purpose to each new generation. It’s what led patriots to choose republic over tyranny, pioneers to trek west, slaves to brave that makeshift railroad to freedom. It’s what pulled immigrants and refugees across oceans and the Rio Grande, pushed women to reach for the ballot, powered workers to organize,” he said. “It’s why GIs gave their lives at Omaha Beach and Iwo Jima; Iraq and Afghanistan – and why men and women from Selma to Stonewall were prepared to give theirs as well.”

Not losing a beat, Obama drives home the reboot of the economy under his administration as the nation teetered on the worst recession since the Great Depression upon entering the Oval office.

“If I had told you eight years ago that America would reverse a great recession, reboot our auto industry, and unleash the longest stretch of job creation in our history… If I had told you that we would open up a new chapter with the Cuban people, shut down Iran’s nuclear weapons program without firing a shot, and take out the master-mind of 9/11…  If I had told you that we would win marriage equality, and secure the right to health insurance for another 20 million of our fellow citizens – you might have said our sights were set a little too high.” The audience cheers and a quiet calm looms over the audience, waiting for his next words.

“But we’re not where we need to be. All of us have more work to do. After all, if every economic issue is framed as a struggle be-tween a hardworking white middle class and undeserving minorities, then workers of all shades will be left fighting for scraps while the wealthy withdraw further into their private enclaves. If we decline to invest in the children of immigrants, just because they don’t look like us, we diminish the prospects of our own children – because those brown kids will represent a larger share of America’s workforce. And our economy doesn’t have to be a zero-sum game. Last year, incomes rose for all races, all age groups, for men and for women.”

For Blacks and other minorities, it means tying our own struggles for justice to the challenges that a lot of people in this country face – the refugee, the immigrant, the rural poor, the transgender American, and also the middle-aged white man who from the outside may seem like he’s got all the advantages, but who’s seen his world up-ended by economic, cultural and technological change.

“For white Americans, it means acknowledging that the effects of slavery and Jim Crow didn’t suddenly vanish in the ‘60s; that when minority groups voice discontent, they’re not just engaging in reverse racism or practicing political correctness; that when they wage peaceful protest, they’re not demanding special treatment, but the equal treatment our founders promised.”

“But protecting our way of life requires more than our military. Democracy can buckle when we give in to fear. So just as we, as citizens, must remain vigilant against external aggression, we must guard against a weakening of the values that make us who we are. That’s why, for the past eight years, I’ve worked to put the fight against terrorism on a firm legal footing. That’s why we’ve ended torture, worked to close Gitmo, and reform our laws governing surveillance to protect privacy and civil liberties.

“That’s why I reject dis-crimination against Muslim Americans.” A deafening applause turns up the volume, as many citizens are fearful for the next administration’s public disdain for Muslims Americans.

Sitting in the front row, next to Vice President Joe Biden, is his wife, First Lady Michelle Obama, with admiration and utmost respect.

“Michelle – for the past 25 years, you’ve been not only my wife and mother of my children, but my best friend. You took on a role you didn’t ask for and made it your own with grace and grit and style and good humor.”

The room lights up with electric applause. Obama pauses and continued. “You made the White House a place that belongs to everybody. And a new generation sets its sights higher because it has you as a role model. You’ve made me proud. You’ve made the country proud.”

As die-hard supporters stand and recite “four-more” years, the reality begins to set in.

“Malia and Sasha, under the strangest of circumstances, you have become two amazing young women, smart and beautiful, but more importantly, kind and thoughtful and full of passion. You wore the burden of years in the spotlight so easily. Of all that I’ve done in my life, I’m most proud to be your dad.”

“To Joe Biden . . . ” Obama wipes a tear away as he begins to show his appreciation. “The scrappy kid from Scranton who became Delaware’s favorite son: You were the first choice I made as a nominee, and the best. Not just because you have been a great Vice President, but because in the bargain, I gained a brother. We love you and Jill like family, and your friendship has been one of the great joys of our life.”

Praise for new rules on Racial Disparities in schools
[…]