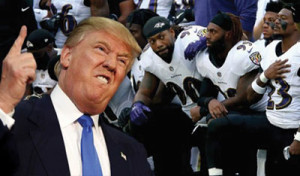 President Trump lashes out against Black NFL Players — says “Kneeling is Not Acceptable” and they should be fired!

NATIONWIDE — President Donald Trump has sparked a national outrage after directing a series of tweets to African American NFL players who have been kneeling down when the national anthem is played before their weekly televised games every Sunday. First, he tweeted: “Great solidarity for our National Anthem and for our Country. Standing with locked arms is good, kneeling is not acceptable. Bad ratings!”

Then, he tweeted: “If a player wants the privilege of making millions of dollars in the NFL, or other leagues, he or she should not be allowed to disrespect our Great American Flag (or Country) and should stand for the National Anthem. If not, YOU’RE FIRED. Find something else to do!”

He even called out NBA player Stephen Curry, who told recently reporters that he doesn’t want to attend the White House ceremony scheduled to commemorate the team’s championship title.

In response, Trump tweeted: “Going to the White House is considered a great honor for a championship team. Stephen Curry is hesitating, therefore invitation is withdrawn!”

Naturally, his remarks have sparked a national outrage among African Americans. The players say they are not anti-American, but are simply upset about issues pertaining to social injustices and racism that are not being addressed by the government.

“I am not going to stand up to show pride in a flag for a country that oppresses Black people and people of color,” said former San Francisco 49ers quarterback Colin Kaepernick. He was the first NFL player who refused to stand during “The Star-Spangled Banner” before kickoff, sparking controversy.

African Americans, however, aren’t the only ones that are disturbed by Trump’s recent comments.

Robert Kraft, owner of the New England Patriots, issued a statement to the media saying: “I am deeply disappointed by the tone of the comments made by the President… I am proud to be associated with so many players who make such tremendous contributions in positively impacting our communities.”

Others have also taken to social media to voice their opinions.

The Miami Dolphins have a bright future. It was that type of feeling in the atmosphere when the Dolphins went up to Foxborough, Massachusetts to play against the New England Patriots. The game didn’t go […]

Trump Keeps Government Open but Continues to Run a Scam

As the Democrats sound the alarm, and condemn the president for his decisions, President Trump is in Florida playing golf. The Trump reality is in real time, and the only response to his insanity is to resist, push-back, and fight. This is a make-believe emergency, another Trump scam or con game, and there appears to be a big legal battle brewing. […]