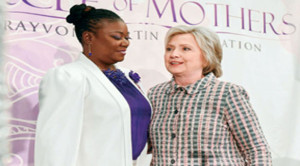 Fulton has taken it upon herself to raise the mantle against senseless gun violence in the name of her son Trayvon Martin, rallying other mothers with similar tragedies in an organization called the Circle of Mothers. Her goal is to try to stem the tide of violence which is taking the lives of young people across the nation.

The Circle of Mothers recently held its third Annual Circle of Mothers — Trayvon Martin Foundation (TMF) Private Dinner & Gala, on May 21, 2016 at the Embassy Suites Hotel in Fort Lauderdale, which featured presidential candidate Hillary Rodham Clinton as the keynote speaker.

The theme for the event was apply titled, “Women Empowering Women to Transform Communities,” as some 60 mothers recently participated in a retreat sponsored by the TMF, joining forces in a unified show of strength and determination to help stem the tide of violence, which has swept the nation and directly impacted their lives forever, with the loss of a loved one.

Karen “Kat” Tynes, spokes-person for the TMF, set the tone for the evening with her introduction of Fulton, the founder of the Circle of Mothers.

“The Circle of Mothers was created as a vision, a vision to serve a vision that offers healing and empowerment for mothers who have suffered unimaginable loss. Committed to eradicating gun violence, Sabrina Fulton deeply understands firsthand the damaging effects this travesty causes. While the death of her child fills her with pain and heartache, the pursuit for justice has allowed her to turn lemons into lemonade.”

Fulton delivered an emotional and heartfelt introduction in which she described what it meant to have Secretary Clinton address the issue of gun violence from a personal perspective, pledging her full support toward the presidential candidate.

“Let me tell you why it’s so important for her to be here for me because other than my mother who’s here in the room who groomed me, who told me and showed me what strength really looked like; because it’s not about me I came from a long line of strong women.

“This lady who I’m introducing has a vision, has a simple vision because what other wo-man do, you know can go from being the first lady to being the president of the United States.

Secretary Clinton approached the stage to a rousing show of enthusiastic applause; it was evident that she echoed the sentiments of those attending the event.

“Like a lot of people I watched in disbelief as her son was killed. But then I saw her talking about her love for Trayvon, urging people who were devastated by his death to make America a more peaceful place. She was joined by Trayvon’s father. I can remember seeing that on television. One reporter described them as models of grace and fortitude. When I met Sabrina for myself that’s exactly what I saw. It takes a special kind of person to endure a loss like all of you. And then find a way to turn it into service. That’s what Sabrina has done; that’s what many of you have done.”

“We must do something about the gun violence that stalks communities and terrorizes families. This is on the minds of every one of us who is here tonight. As we remember all of the young people who have been lost. This problem isn’t going away. Even toddlers are getting their hands on guns and shooting themselves or someone else. There have been at last count, 23 cases of toddlers getting guns so far this year. I don’t know what evidence somebody needs in this country to know that something has gone terribly wrong. We are smart enough and strong enough as a nation to figure out how to protect the rights of responsible gun owners while keeping guns out of the hands of domestic abusers and other violent criminals, of gang members, and the severely mentally ill,” added Clinton.

Tracy Martin also attended the event and has stood side by side with Trayvon’s mother Sabrina, through the entire ordeal. He said although some progress had been made in addressing the issue of gun violence against young African Americans there was still much work to be done.

“This is a historic event. It stands for all the moms who have lost children and give them a chance to heal a little bit share their pain with each other and let them know that there are mothers out there like themselves that are grieving, but through grief there’s resto-ration and you can do other things to help build your pain that you’ve learned. “

“I think violence against young Black males is still at the forefront. We’ve gained a little ground but we still have a long way to go. Right now we see it happening everyday there’s a new story we hear every day. We just need to find a way to corral all of the violence that’s going on against our young men.”

Congressman Alcee Hastings offered his strong show of support for the Circle of Mothers as well as Secretary Clinton who he called, his “longtime friend.”

“I consider it of critical importance to be involved with the Circle of Mothers largely for the reason that the agonizing that’s been going on in our respective communities  A lot of us have to stand straight up and face what’s happening in our own communities long before we begin to address others. And that’s what Ms. Sabrina Fulton and Mr. Tracy Martin and the ladies that are here from all over the country are about and that’s trying to bring attention to the need for sensible gun control not taking anybody’s gun away. I’m so sick of Donald Trump I don’t know which way to say how much I’m upset at what he does but I’m here for that reason and also here to support Hillary Clinton who is a long standing friend of mine And I’m grateful that she’s here. And I know that these ladies are going to help her become president of the United States.”