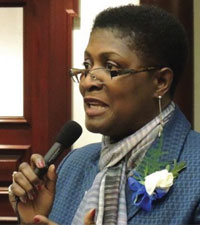 Residents of the city of Lauderdale Lakes may have to brace to face increased property taxes, according to Mayor Hazelle Rogers, who said the city is in a financial bind which it is slowly climbing out of.

Lauderdale Lakes already has the highest property tax rates in Broward County but plans to raise taxes and fire-rescue fees due to a $1.1 million budget gap.

City commissioners voted recently to tentatively set a property tax rate of $8.50 on every $1,000 of taxable value. That’s the same rate as last year, but when coupled with rising property values, it will result in tax increases. The fire-rescue fee, which appears on the property tax bill, is proposed to rise. Since 2011 the city has downsized its City Commission, fired its city manager, replaced him, and elected new leaders.

Rogers said the city can’t afford to cut back on property tax income right now. The city has largely returned from the brink of bankruptcy but still is financially fragile. “We’re looking good,” she said, “but we have to be so cautious. The new commissioners just want to take time to look at everything.”

Expenses to be cut

Even with the new tax rate, some expenses would have to be cut because of the projected budget gap. Merit-based pay raises could be eliminated, cost-of-living raises delayed, and special events eliminated among other cuts.

With other taxes factored in, property owners in Lauderdale Lakes last year paid about $24 on every $1,000 of taxable value, the highest total tax rate in the county, according to the property appraiser’s office. (The lowest total rate is consistently the city of Weston, where property owners last year paid about $17 in tax for every $1,000 of taxable value.)

Property values in Lauderdale Lakes are, however, relatively low, helping to keep tax revenues low despite the tax rate. The average home value is $101,855, less than half the county average.

Rogers said a key focus of the city’s efforts in the coming year will be economic development. This includes attracting higher income-earners to Lauderdale Lakes. A quarter of the city’s population lives below the poverty level, much higher than the countywide average of 14.5 percent.