One thing’s for certain, it’s good news they don’t play the New England Patriots in their first round matchup. On Sunday during the 103rd installment of the two rivals, the Patriots took the Dolphins behind the woodshed and got the 35-14 win. 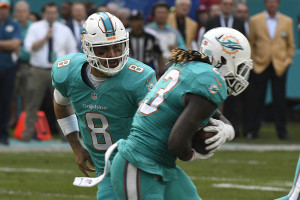 “We have to learn from this,” head coach Adam Gase said.

New England lost their previous three meetings in Miami Gardens. Nonetheless, this first half couldn’t have been any more dominant for their franchise. Miami had a grand total of four yards in the first quarter. They got their first first down in the second quarter. At halftime, they were down 20-0.

“We just need to stop shooting ourselves in the foot,” tackle Branden Albert said. “That was the main thing we did today. We turned the ball over. You can’t do that against that team. Everybody knew that.”

This wasn’t a meaningless game either. Each of these two teams had playoff positioning to fight for. New England wanted to get the No.1 seed and lock up home field advantage throughout the playoffs. Meanwhile, Miami wanted to ensure they’d get the No. 5 seed and travel to Houston instead of Pittsburgh. 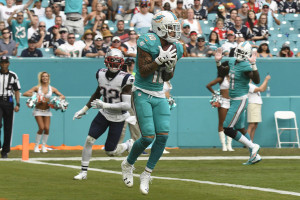 Nevertheless, the game in the grand scheme of the Dolphins season is minute. Miami next week will get the opportunity to play in the playoffs. That feat alone hasn’t been accomplished for over eight years.

“We’re still in it. Last year at this time we were going home” said safety Michael Thomas.

Now that the regular season is over, we’ll have to see how the Dolphins handle the Pittsburgh Steelers.

This game will be intense at Heinz Field. Pittsburgh knows in the back of their mind that this Dolphins team can defeat them. The Dolphins should come in confident during this game since they defeated the AFC North champion Steelers, who lost 30-15 at Hard Rock Stadium in Week 6.

Regardless of the outcome of next week’s game Dolphins deserve a round of applause. Miami this year finally lived up to the prediction that many had last year. This team came together during their biggest moments of crisis and turned their season around. Now next week they’ll be able to walk into Heinz Field knowing that they earned that opportunity to compete for a Super Bowl.

“It’s exciting,” Ajayi said. “We didn’t get the result we wanted today, but we get the opportunity to keep playing. Every game after this is elimination. We still have a chance to go get it. The regular season is over. We know we still have a lot to play for.”

Ghosts of the Orange Bowl
[…]

MIAMI – The Miami Dolphins were awarded defensive back Brandon McDonald (from Tampa Bay) off waivers, the team announced.   The team also placed defensive back Richard Marshall on Reserve/Injured List. The 5-11, 185-pound McDonald joins Miami after spending the first nine […]