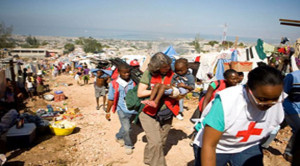 Red Cross donations were half a billion dollars but they only built six houses?

The Red Cross has been receiving donations since the devastating earthquakes took place in Haiti.  This horrific tragedy left an already impoverished nation with tons of rubble and people without homes. Trusting donors have been contributing to the Red Cross fund, LAMIKA, with gifts amounting to nearly half a billion dollars. LAMIKA is intended to serve the needy of Haiti in the process of rebuilding homes.

Though Red Cross has publicly announced that their work in Haiti has been successful, only a scattered variety of projects have been initiated in the country—none of which adds homes or life expectancy to the natives there.

“They collected nearly half a billion dollars,” said a congressional staffer who helped oversee Haiti reconstruction. “But they had a problem. And the problem was that they had absolutely no expertise.”

According to ProRepublica, the source of the Red Cross discrepancy information, nine out 30 leadership positions were specific to housing and health.

Red Cross says that they had trouble keeping the positions filled due to “the security situation, separation from family for international staff, and the demanding nature of the work.”

“It would be hard to create the perfect plan from the beginning in a complicated place like Haiti,” Red Cross said, as an ex-planation to the length of time it has taken for them to begin working. “But we also need to begin, so we create plans that are continually revised.”

One of the Red Cross former administrative workers that is native to Haiti, Shelim Dorval, says that he felt that some funds were wasted in bringing in outside workers who needed housing, travel expenses, home visit expenses, paid vacations, and meals.

“For each one of those expats, they were having high salaries, staying in a fancy house, and getting vacation trips back to their countries,” Dorval said. “A lot of money was spent on those people who were not Haitian, who had nothing to do with Haiti. The money was just going back to the United States.”

“Five hundred million dollars in Haiti is a lot of money,” former Haitian Prime Minister, Bellerive, said. “I’m not a big mathematician, but I can make some additions. I know more or less the cost of things.