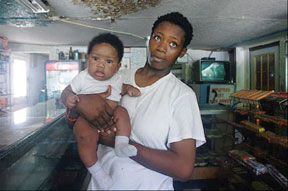 Shae Hill holds her daughter Fredderio in a store in Glendora, a rural town in the impoverished Mississippi Delta.

While most of America has largely recovered from the Great Recession, a new report from the Southern Rural Black Women’s Initiative (SRBWI) shows that Black women in the rural south are trailing far behind the rest of the nation, living in an impoverished space where entire industries are shuttering factories and shedding jobs, world-shrinking broadband Internet is a novelty, and a lack of infrastructure stands in the way of education and proper nutrition.

The report uses existing data and features interviews with more than 200 families to ex-amine the overall well-being of Black women in nine rural counties across the Black Belt in Alabama and Georgia and in the Mississippi Delta. In these areas 20 percent of the population has lived in persistent poverty for the last five years, as defined by the United States Department of Agriculture. The results show that when it comes to economic security, health, education and connection to the rest of the world, these women—and their children—are not afforded opportunities on par with their peers.

In fact, the report revealed that about nine out of 10 of these women are living in poverty. “And many of these women are heads of household, so we can extrapolate that there are an overwhelming number of children who are also impoverished,” said report author Dr. C. Nicole Mason, who is also the executive director at the Center for Research & Policy in the Public Interest, during a press briefing about the report.

Key takeaways from the report include:

“The rural South is a part of America, and we are hoping that this report will help to illuminate the fact that we have a part of the country where a great deal of suffering is taking place,” Sophia Bracy Harris, Alabama director for SRBWI, said during the press briefing. “But there’s a great deal of hope. People simply need for us to pay attention and support them in ways that [will help them] support themselves.”

“Today’s report should be a call to philanthropists, foundations, and our government to infuse critical resources into communities to build the long-term economic security and well-being of low-income Black women, children and families in the rural South,” Mason said in a press release.

Among the recommendations offered in the report are create local businesses that provide training and long-term jobs, support programs that prepare high schoolers for college, invest in programs that feed low-income children during the summer, provide reproductive health education to reduce pregnancy and STI transmission rates, and revamp the education system.

In his address, the president said that the museum was an essential part of America’s story.