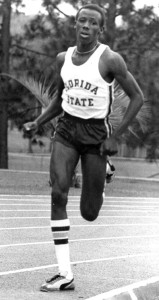 DAYTONA BEACH, FL – It’s been said that good things come to those who wait. Well, the wait is over for Phillip Rolle.

It’s a done deal. Rolle officially cemented his place in track and field history on January 5, 2018 with his induction into the Florida Track & Field Hall of Fame.

“It really knocked me off my feet, because I wasn’t expecting it.” Rolle said of his induction.

“So, it really caught me by surprise. I was shaking the whole day after learning about it.

“It’s truly an honor and I truly feel blessed.”

Rolle, a Fort Lauderdale native, was among five new inductees who were honored during the Florida Athletic Coaches Association (FACA) Track Clinic last weekend at the Hilton Daytona Beach Oceanwalk Resort. Other honorees include Derek Monroe, Alice Bennett-Sims, Lorraine Deleveaux and Ira Welborn. Monroe, also a Fort Lauderdale native, and Rolle were high school teammates at Fort Lauderdale High. Monroe earned his way into the Hall of Fame as one of the top officials in the state. Deleveaux also has south Florida roots. She’s a long-time assistant girls track coach at Miami Northwestern High School, which boasts one of the most dominating girls programs in the nation.

Rolle can truly rest on his laurels.

The accomplishments of this former Ft. Lauderdale High School and Florida State University track star didn’t go unnoticed, even as the years rolled passed. His achievements were numerous.

Rolle was one of the most dominating middle-distance runners in the nation during the late 1970s and early ‘80s.

“There was always something special about Phillip,” Derek Monroe said. “You always knew he could accomplish great things if he continued to run because the talent was there.

“I’m really happy for happy for him and for us . . . Two teammates getting inducted into the Hall of Fame together is really special. We really had some exceptional athletes on our team back then (in high school). Guys like Jarvis White and Vernon Dooling. They, just like Phil, were difference-makers. But Phil kept going and I’m proud of him.”

Kip off the old block

Rolle’s high school teammates dubbed him “Kip”, after the legendary Kenyan distance runner Kipchoge “Kip” Keino. Heralded as the greatest distance runner during his era, Keino won gold medals at the 1968 Olympics (Mexico City) and 1972 Olympics (Munich) in the 1500 and 3000-meter Steeple, respectively.

Keino is best known for his astounding performance in defeating U.S. sensation Jim Ryan in the 1500 meters at the 1968 Olympics.

Like Keino, Rolle took no prisoners on the track. He was able to turn heads the same as Keino.

Rolle had a knack for blowing by opposing runners on the backstretch just like passing cars on I-95. Those feats caught the eye of Miami-Dade Community College South Campus coach Jerry Isom, who signed Rolle to a scholarship.

After FSU, he joined the military and represented the U.S. Army in several national and international meets, including the 1980 U.S. Olympic Trials in Eugene, Ore.

“Over the years, there were always guys that ran for time and whatever,” Rolle recalled. “But every time I got in a race, it was to beat somebody. It wasn’t about the time.

“It was about winning. The best advice I can give to anyone is stay true to your dream and at some point, along the way, they’ll realize that it’ll take a little bit extra . . . and it’s always going to be that little bit extra that gets you to the next phase.”

The race is not given to the swift nor the strong . . .

There are many ways to describe Rolle as a runner. He was competitive. But he also had his own unique style of running. Rolle would lean his head back every time he forged his trademark kick on the final straightaway . . .  much to the delight of the crowd. He was a crowd-pleaser. Of course, one could never forget Rolle’s flashy style either . . . wearing long white socks that extended up to his knees.

“Every time I think about Phil and what kind of runner he was, it reminds me of Ecclesiastes 9:11,” Monroe said. “The race is not given to the swift nor the strong but he who endures until the end.

“It fits him like a tailor-made suit. It’s the best way to describe him. Phil wasn’t the fastest or the strongest, but you couldn’t beat him. He’d battle you all the way to the finish line. That’s why he’s Hall of Fame.”