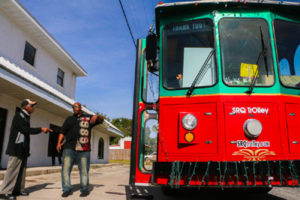 (BLACK PR WIRE) SARASOTA, FL – Visit Sarasota County is pleased to announce the addition of ­The Newtown African American Heritage Trail as an official attraction on the U.S. Civil Rights Trail, which has more than 100 attractions across 15 states. The Newtown African American Heritage Trail is now the southernmost site. The announcement was made in Sarasota, Florida by Vickie Oldham, founder of Newtown Alive, an organization formed to promote the history and culture of Newtown, one of Sarasota’s oldest communities and Overtown, the neighborhood of the earliest African American settlers.

The Newtown African American Heritage Trail attraction on the U.S. Civil Rights Trail highlights the history of Sarasota’s African American Newtown community and Newtown Alive! tours and will focus on the 1950s and 1960s efforts of Newtown residents to desegregate Sarasota’s beaches. These efforts included car caravans from their community to Lido Beach only 10 minutes away. “Wade-ins” of the 1950s were held to force beach integration. The strategy drew media attention and opened an early front in the fight for equal rights years before better-known state and national civil rights victories of the 1960s. The wade-ins, modeled after lunch counter sit-ins, coupled with activists’ attendance at city and county commission meetings moved the needle toward beach access at a time when less than two miles of Florida’s 2,000-mile shoreline were open for use by African Americans. It wasn’t until the landmark Civil Rights Act of 1964 that Sarasota County beaches were fully integrated.

“Change did not occur overnight, in a year or even in two years. Generations of Newtown residents carpooled to the beach and faced jeers, hurled rocks and intimidation,” said Newtown Alive founder and director Vickie Oldham. “They opened access to Sarasota’s number one asset for everyone. Telling the stories on tours are a way to celebrate the courage, dignity, and determination of activists,” Oldham added.

To commemorate the addition of the Newtown African American Heritage Trail to the U.S. Civil Rights Trail and the 400th Anniversary of transatlantic slave trade, an expanded schedule of New Newtown Alive Trolley Tours are available for both residents and visitors throughout the upcoming spring travel season. There are 15 historic markers to explore and three stops, including the just added Newtown African American Heritage Trail. Visitors are treated to onboard storytelling by African American pioneers who transformed one of the city’s oldest neighborhoods with freedom song leaders providing musical inspiration. The cost is $40 per person.  For more information, schedules and to book a tour: http://www.newtownalive.org/book-trolley-tour/

“Many of us take our beautiful, 35 miles of pristine, white sand Gulf of Mexico beaches for granted.  However, the sad reality is that most of our beaches were off limits for African Americans during the 50’s and 60’s,” said Virginia Haley, president, Visit Sarasota County.  “It’s important that we remind ourselves of this terrible point in our history especially during this year when we as a nation commemorate the 400th anniversary of transatlantic slave trade.  It’s also key that we educate our residents and visitors on the significant impact that the Black community and the Newtown neighborhood had on our city’s development.  The Newtown Trolley Tours are an excellent and enjoyable way to do this.”