On the Scene with Crystal Chanel

After #MeToo, I hope #Not I

In conjunction with #MeToo, I applaud the Tower Forum for hosting their monthly breakfast on the topic of “Harassment: A Power Play”.  The Tower Forum, founded in 1976, is comprised of Broward County’s business and civic leaders who host thought-provoking discussions highlighting political and social issues.

According to nytimes.com though, Tarana Burke, a woman of color, began using the phrase Me Too in 1997 to help victims of sexual assault cope. Burke, the Founder of Just Be Inc., continued to use the phrase long before hashtags became a thing. However, when actress Alyssa Milano took #Metoo to Twitter in October of 2017, the hashtag went viral instantly with reports of over 12 million posts in 24 hours and celebrity endorsements from Lady Gaga, Ellen Degeneres, Oprah Winfrey and Gabrielle Union. 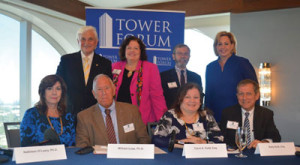 The Tower Forum’s breakfast, sponsored by Nova Southeastern University, featured a dynamic panel of accomplished men and women, [i.e. Dr. William Leap – an affiliate professor at Florida Atlantic University, Attorney Carol Field, Attorney Kelly Kolb, and Dr. Kathleen O’Leary – a professor at Wayne Huizenga College of Business Entrepreneurship,] who put the social media movement right in front of our faces. The discussion was hosted by NSU President Dr. George Hanbury, who opened the conversation condemning individuals of great power and wealth for using their influence as a power play to take advantage of women.

Panelists and Tower members alike chimed in from a multitude of perspectives forcing me to realize that even though my grandmother taught me to protect the jewel between my legs at all costs, I too, had been #metoo’ed far too many times to count. Thankfully, her words rang in my ears when I found myself being molested at eight years old by an adult male “friend” of the family.

Despite his “power position” within my family, I found an opportunity to report his behavior. Unfortunately, I was an adult before I fully under-stood that my allegations of sexual assault had not fallen on deaf ears. Regardless, I was empowered by the fact that I spoke up on my own behalf. So in terms of healing, we must inform our girls that silence pro-longs the pain. We cannot allow cases of assault to become cold by reporting abuse years after the offense.

Although, the prevalence of “Bro Culture” discourages women from reporting every case of sexual misconduct every time, we should try. Despite being molested as a child, I was not deterred from standing my ground when I found myself being #metoo’ed by a military superior. My sergeant would blurt out demeaning sexual commentary anytime I entered his space. But one day, I had enough and found the strength to pull that sergeant aside, look him in eyes and express my disdain for his lack of professionalism. I made him fully aware that after #Metoo, #NotI.

And yet another #MeToo moment came full circle when a popular and married media professional asked if he could record a nude video of me in exchange for public relations’ access. I declined his offer without hesitation by ceasing any further communication. And once again, I was empowered by my #NotI stance in the wake of promises of fame and fortune. More importantly, I believe his perception of women doing anything for career advancement was altered when he met me. Years later, I am happy I dealt with the issue when it happened because when I see him from time to time, I firmly believe he is no longer that same person he was years ago… Are you?

Together, we can do our part to transition for #MeToo to #NoMore cuz #TimesUp and #NotI. Our movement should culminate with teaching males to use their power to protect and not abuse, while teaching females to speak now, as opposed to later, regardless of the abuser’s influence. In the wake of #MeToo, we must endeavor to say #NotI, not now, not ever, because we now, have the attention of the entire nation.

You Do Realize YOU are The New Media!

Over the weekend, I attended a Media Empowerment Brunch hosted by Ardith Valencia, the CEO of Steppin Out TV, and discovered that collectively, we are what media looks like in 2018. […]

When Was The Last Time You Checked On Your Mentor

In bragging about my mentor, I am always eager to tell people that Suzzette Turnbull is the owner of Uncommon Marketing, an established social media marketing & training firm that brings 20 plus years of business and industry authority. Most recently Turnbull was recognized with the Entrepreneurial Excellence Award and named one of the 100 Most Successful Women in Business. She is a transformational leader and highly sought-after voice of social media marketing and business acumen. […]

3 Things You Need To Know About Marketing

Marketing is the elusive magic that all business and brands must have in order to attract their target market. However, marketing can be difficult for some to understand and seemingly costly. As a result, it becomes necessary to market ourselves as much as our brand because on all levels, but especially the local levels, people do business with people they know, like and trust. […]