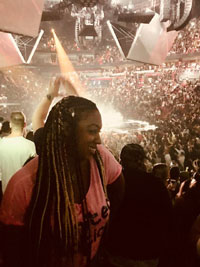 On The Scene with Crystal Chanel

If hip hop was church, Jay Z, born Sean Cater, would definitely be a Bishop, delivering relatable truths over catchy beats that give insight on how to get to the promise land… Or the land of love, as the concept of love was undeniably present and prevalent throughout his past concert. A documented legend in the hip hop game, Jay Z produced 4:44 which topped the charts, and filled a void by providing head-bobbing lyrical content for true hip hop fans to groove to. It is safe to say that Jay Z single- handedly saved the summer in the name of hip hop, allowing powerfully witty and poetically conscious lines to permeate the radio airwaves.

Accordingly, 17,000 fans filled the stands of the American Airlines Arena to hear the hip hop mogul perform the next chapter of his life live.

The theme throughout the concert was love, and Jay Z excluded love from his wardrobe, to his lyrics, from his message to his fans, to his demeanor. He performed solo doing a consistent, yet energetic four-step on a raised octagon shaped stage with visible band members un-derneath allowing fans to see Jay Z and the band from any seat in the stadium. The crowd was vast; it was diverse, and intimately connected simply by their love for the man we all knew as Jigga at one point. Concert goers recited and echoed vintage and recent Jigga rap lyrics while reminiscing to that time when you could listen to a rapper’s story, enter their lives and escape the perils of yours… Times have changed but for a moment in time, we held up the Roc and rocked for the nation of rap fans everywhere.

With “Blind for Love” stitched on the back of his leather sports jacket, Jay Z performed the album’s title track, 4:44. He intro’ed the track with a message to fans of how this was the most uncomfortable song he had ever recorded. He told concert goers that we had to push past the uncomfortable to grow, and then an awkward but necessary silence penetrated the concert atmosphere allowing all of us to recall areas we needed to grow from… It was group therapy at its finest. Then he placed the mic between his hands in a caressing manner and began to recite the Beyoncé inspired lines. Head down, possibly hiding tears, he disappeared in the music but he took us with him.

It was sentimental experience that none of us will ever forget. Personally, it reminded of when he made his, “Song Cry” in 2002. There was such emotional greatness in those bars, but this time, 15 years later a more mature, married with kids Jay Z, makes the song apologize and love at the same time. Beyoncé and Blu Ivy’s essence was in the building, and for that we are forever in love with him.

But Jigga gave us more than his love for Beyoncé, when he paused to show his love for his fans and Black fans in particular. He reminded us that kneeling was not about disrespect but about justice. He stated with confidence and un-apologetically, that the injustices that Blacks face is not a Black or White issue but a human issue. Then the beat for the “OJ Song” dropped, and humans: Black, white, Spanish, old, young, and everything in between rapped in unison. He reminded us all of the power in working together, and even recommended that we, “Boss Up. We are not second class citizens, [and that we couldn’t just] remain hired help.”

4:44 was an lyrically inspirational story of a boy from “Marcy (Me)” Projects, New York who used his “Empire State of Mind” to bypass 99 Problems, brush that “Dirt of Your Shoulder” and be On to the Next One while Big Pimping.  And with that, Jigga ended the concert a propriately with the cross over track, Encore, which left me thoroughly satisfied and wanting more at the same time. Jay Z, on half of fans everywhere, I sincerely thank you for sharing your musical truths, positive and negatives, with the world. We are forever grateful and blessed to enjoy your art.

Why isn’t President Trump tweeting about the Solar Panel Industry?

Why isn’t President Trump tweeting about the Solar Panel Industry?

Who is the brother in the boat with George Washington?

Gen. George Washington strikes a heroic pose, standing in a boat being rowed through an icy river on his way to win the Battle of Trenton during the Revolutionary War. […]

What Will You Do??