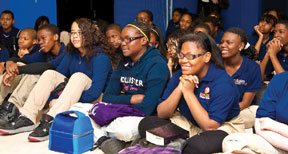 The back door opened just before the late-model minivan reached the curb in Brooklyn’s Flatbush district.

Brothers Daniel, eight, and Diallo Burgin, 10, jumped out, slid the door closed, walked to the driver’s window, and planted big kisses on their father’s cheek. Rev. Dillon Burgin, Methodist pastor of Brooklyn’s Harmony Tabernacle, watched as his boys skipped into the Explorer Charter School building. Burgin had simple reasons for sending his sons there.

“It has some advantages, in terms of the resources allocated to charter schools,” he said. “I am not happy that New York City has, in a sense, been allocating funds disproportionately to charter schools, but I am happy that since that is the reality, we can at least make use of it by letting the boys go to this school.”

Despite popular misperceptions, charter schools hardly seem overfunded. According to the New York City Department of Education website, charters will receive $1.6 billion, or 7.3 percent, of its $21.8 billion 2015-2016 operating budget.

Sam Johnson clutched his daughter Samaya’s hand as they approached the school-house door at Explore Charter in Brooklyn.

“They actually teach here,” Johnson said. “My daughter is going to the sixth grade and reads better than me. She gets into it. And her math is great.” He added: “Safety is one thing, education is another, and she’s getting all of that here,” Johnson said of Samaya. “You want your kid to have the best of everything.”

Critics complain that charters divert public money to privately run organizations that syphon off the best public-school students. But American Federation of Teachers (AFT) President Randi Weingarten recently softened her group’s critique of charter schools, as the Washington Times reported. She told the Atlantic Education Summit on June 15 that the relationship between the AFT and charters “should not be a competitive environment. We should figure out how to work together and how to do things together. But there’s too much competition and not enough collaboration.”

David Hardy is co-founder and CEO of Boys Latin Charter School in working-class West Philadelphia. Hardy said a charter school was the only way he saw to help at-risk Black males earn high-school diplo-mas and go to college.

“A lot of the guys we got into college would not have finished high school if they had not come to us,” Hardy said. “Many of them had been labeled as troublemakers. We were their only option.”

Boys Latin has graduated 400 students in five graduating classes. Seventy nine percent of graduates have gone on to college, Hardy said, the vast majority (80 percent) to four-year schools. Across Philadelphia’s government-school system, only 32.9 percent of high-school graduates matriculated to college in the 2013-2014 school year, the most recent data available.

In New York City, “We have 143,000 kids trapped in failing schools where more than 90 percent of the kids can’t read or do math,” Success Academy charter school group founder Eva Moskowitz recently told the conservative Manhattan Institute. “Statewide in New York, we have 800,000 kids who failed basic proficiency exams. And this has been going on for decades.”

In the next academic year, Success Academy will run 34 charter schools and serve 11,000 students in the Bronx, Brooklyn, Manhattan, and Queens. Moskowitz said she hopes to operate 100 schools within a decade.

Some 210 charters will operate in New York City in the 2015-16 school year, up from 180 in 2013. Governor Andrew Cuomo (D – New York) has increased the universe of charters: There currently are 248 statewide. Potential charters are capped at 460.

In May, Cuomo introduced his Parental Choice in Education Act, which would provide families school-choice-related tax incentives. The state legislature is weighing this measure.

But for now, the political brouhaha means little to parents like Rev. Burgin, who, though aware of the debate, simply want the best for their sons and daughters.

“When you have bad and rotten, you choose the bad over the rotten,” Burgin said. “By and large, how the public schools function, it is rotten. Charters are the better of two bads — them versus the public schools.”

Still, the rigorous workload and discipline of charter schools fit the bill for parents like Leah Baptiste, whose daughter, Dmitira, 13, is an Explorer Charter School eighth grader.

“I like the fact they are so strict about uniforms, about time, about homework, about behavior,” Leah Baptiste said. “They prepare them mentally not just for school, but beyond school. Most kids go to school, and they’re not prepared for the real world.

“This more prepares them for the real world.”