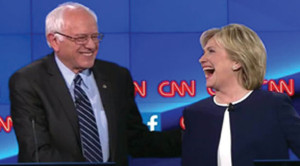 After much speculation, Senator Bernie Sanders said that he will vote for his Democratic rival Hillary Clinton in November.

Sanders stopped short of endorsing Clinton in his recent statements. Sanders, who received about 13 million, said that he’s waiting to hear what she has to say about many of the issues that he raised during his campaign.

During an interview with CBS This Morning, Sanders noted that a vast majority of young voters supported him in the primaries and caucuses.

“And what those voters are saying to the establishment, to Secretary Clinton — ‘Hey, are you gonna stand up for us? Are you gonna raise the minimum wage in fact to 15 bucks an hour?’” Sanders said.

The senator from Vermont also said that his goal is to beat Republican nominee Donald Trump and that he still plans to work to better the Democra-tic Party.

On MSNBC’s Morning Joe, Sanders expressed his feelings on the businessman.

“Yes. Yes, I think the issue right here is I am going to do everything I can to defeat Donald Trump. I think Trump in so many ways will be a disaster for this country if he were to be elected president.”

Though he didn’t win, Sanders says he can still get the Party to warm up to free college tuition, a $15 minimum wage and policies that could mitigate the human impact on climate change.

Rushawn Walters is a 2016 NNPA “Discover The Unexpected” (DTU) journalism fellow at the Washington Informer. The DTU journalism fellowship program is sponsored by Chevrolet. Check out more stories by the fellows by following the hashtag #DiscoverTheUnexpected on Twitter and Instagram. Like our Facebook page at “NNPA Discover The Unexpected.” Learn more about the program at www.nnpa.org/dtu.

‘And a little child shall lead them’

‘And a little child shall lead them’