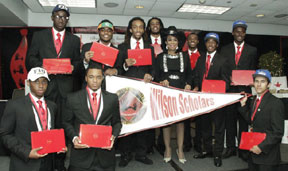 MIAMI, FL – Congresswoman Frederica S. Wilson (FL-24) celebrated the 5000 Role Models of Excellence Project’s “Academic Signing Day” for the 2017 class on Friday, May 5, 2017, at the Hyatt Regency.  Sixty-two graduating seniors from 15 senior high schools – newly christened Wilson Scholars – put pen to paper and signed scholarships to the colleges or universities of their choice. 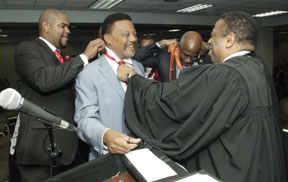 “My pride is beaming at the wonderful accomplishments of these young men.  I can’t contain my excitement that they have worked hard, persevered, and prepared themselves for success in their next phase of life,” Wilson said. “As someone who has dedicated my life to helping young men and boys of color, I look forward to the successes and achievements of this group of 62 Wilson Scholars.”

Graduates were neatly dressed in custom made suits and 5000 Role Models signature neckties donated by the Sean John Collection at Macy’s.  Graduates also received brand new, red laptops, signifying the signature color of the Role Model program, along with a copy of the book, Obama’s Legacy, What He Accomplished as President by author Michael I. Days.

Role Model Judge Greg Mathis, Retired District Court Judge and Syndicated Television Show Arbiter, served as the keynote speaker and gave a rousing speech, charging graduates to remain steadfast in their commitments to family, education, and their community. The program included a White Coat Ceremony for Role Model Dr. Joseph Dubery, a graduate of Howard University College of Medicine, and the Miami Northwestern Senior High Class of 2005. Dr. Dubery joined the 5000 Role Models while in the sixth grade at Parkway Middle School and is the third Role Model to become a doctor. The event concluded with a soulful rendition of the song Rise Up, performed by Miami Norland Middle School Role Model Mentee Wesley W. Wray.

Congresswoman Wilson noted that none of this year’s scholarship recipients were born when the program started. “This is the epitome of what it means to prepare for generations of children yet unborn,” she said.