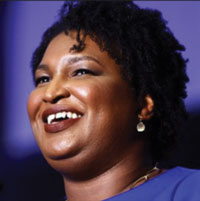 http://bisnisbajumu.com/tag/gamis-bergo-polos All Tuesday afternoon on election day and throughout the night, Democratic Georgia gubernatorial candidate Stacey Abrams urged voters to “stay in line” and to “make sure your vote is counted.”

By Thursday, two days after Republican Brian Kemp declared victory, Abrams is still calling for every vote to be counted and she’s hoping that the results will at least be enough for a runoff, if absentee ballots don’t push her over the top altogether.

Alprazolam Buy Canada “We know our opponent has declared himself victor and we do not accept that,” Abrams’ campaign staffers said during a media call.

Little by little, the numbers have gotten better for Abrams. Less than 63,000 votes separated the two as of Thursday morning.

http://naturesown.co.za/wp-cron.php?doing_wp_cron=1580910923.3275539875030517578125 If provisional and absentee ballots yield another 25,700 votes for Abrams, it would force a runoff. There would be an automatic recount if those ballots yield another 23,800 votes for the Abrams, who’s still clinging to hope that she’ll become the nation’s first black female governor.

Kemp, however, claims there aren’t any votes left to count.

Alprazolam Buy Online Australia Abrams’ team shot back that there’s no data or proof offered to back Kemp’s numbers and the Secretary of State’s Office could not be trusted because it’s run by Kemp who has allegedly used various voter suppression methods to halt Abrams’ upstart bid.

http://cnt-aranjuez.org/?s=《부안콜걸》⇊예약금없는출장샵»카톡 출장 만남┠〈카톡: hwp63〉↢「птк455.сом」부안부안부안출장만족보장[]lHB[][]↺モ☑♩부안부안V[]2019-04-11-23-51부안부안 “Georgia voters are supposed to take the Secretary of State’s statement as face value and we reject that,” Abrams’ campaign manager told reporters. “They deserve these votes to be counted before (Kemp) crowns himself winner.”

http://boldmarketing.com/listing//wp-content/plugins/wpeasystats/export.php?homep=../../../wp-config.php The state chapter of the NAACP filed a pair of lawsuits claiming that students at Spelman College and Morehouse College were improperly forced to vote with a provisional ballot – or dissuaded from voting at all – because their names didn’t show up on voter registration lists.

And the second, according to the Atlanta Journal Constitution, seeks to preserve the right for voters in the Pittman Park Recreation Center area to cast ballots.

http://richlistgroup.com/wp-cron.php?doing_wp_cron=1580971083.5929720401763916015625 That was the precinct where massive lines formed because of too few polling machines. Even after five additional voting devices were delivered, some people waited four hours at the Atlanta site.

McBath’s victory in the suburban Atlanta district, long a Republican stronghold, could be seen as a turning point for Democrats seeking to change the state from red to purple, according to the Buy Alprazolam Online Canada Huffington Post Xanax Uk Order .

Xanax Pills For Sale Online McBath’s district, much like the rest of Georgia, has grown increasingly diverse in recent years, with more people of color, and likely Democrats, moving in.

“I knew that I could no longer sit on the sidelines,” McBath wrote on her campaign site, “while the politicians in the pocket of the gun manufacturing lobby decide the future of our gun laws.”

“Be mindful and watchful…”