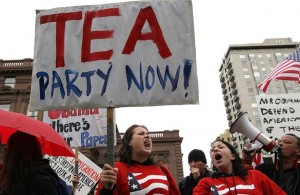 Tea Party activists in Tennessee are attempting to remove any and all references to slavery from local history textbooks, specifically references to the Founding Fathers owning slaves, according to the Huffington Post.

Hal Rounds, a Fayette County attorney and spokesman for the organization, said at a news conference that they seek to eliminate “an awful lot of made-up criticism about, for instance, the founders intruding on the Indians or having slaves or being hypocrites in one way or another.”

“The thing we need to focus on about the founders is that, given the social structure of their time, they were revolutionaries who brought liberty into a world where it hadn’t existed,” Rounds continued, claiming “it was their progress that we need to look at.”

During the conference, fellow activists handed out fliers outlining the local Tea Party’s goal to “compel the teaching of students in Tennessee and the truth regarding the history of our nation and the nature of its government.” In addition to the slave owner status of the founding fathers, they seek to establish that “the Constitution created a Republic, not a Democracy.”

This push comes after the Texas Board of Education approved changes to its history and civics curriculum, changes which examine slavery’s positive aspects, equate the positions of Jefferson, Davis and Abraham Lincoln, and note the “unintended consequences” of affirmative action.

If Tea Party activists can make it their goal to rewrite history to suit themselves, then it should also be the goal of those who value the truth to follow every move that they make and spread the real truth at the same rate that they are spreading their “truth”.

One has to wonder if America is heading to a point in time when what children learn in school as History will be just as far from the truth as the fairy tales that most children read and have read to them throughout their tender years.

What sorrow awaits you who lie awake at night, thinking up evil plans. You rise at dawn and hurry to carry them out, simply because you have the power to do so. — Micah 2:1New Living Translation […]