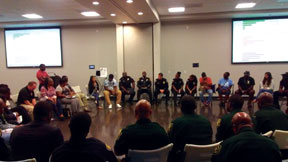 FORT LAUDERDALE, FL – The Urban League of Broward County (ULBC) hosted a restorative justice event on April 26, 2016. The event took place at The Urban League’s downtown headquarters at 560 N.W. 27 Ave., Fort Lauderdale, Fla. between the hours of 9 a.m. to 2 p.m. The purpose of the event was to raise awareness about community needs, address community policing and engagement and create an open dialogue for community relations with police officials.

Each attendee was given a chance to express their individual ideas and experiences when dealing with police officers in and around their community via microphone. Everyone attending the forum at its conclusion made individual pledges to do their part to help the surrounding community by volunteering with local organizations or continuing with their existing volunteer work.

After intermission ended, youths attending their separate group activity. They were ushered in to watch a Ted Talk video segment on techniques police should apply when serving the community.

The video’s speaker, a former police officer himself, emphasized the need for police officers to exercise a balance in their duties, which is to protect as well as serve. He stated how too often police departments a-round the country had forgotten that they are servants of the communities they patrol and as a servant police must give back on a personal level.

During the intermission, I had a chance to speak with the head of the event’s staff, Ms. Courtnee Biscardi and asked her what the ULBC wanted to accomplish with this event moving forward. Her official statement was, “We want to high-light how law enforcement and members of the community can positively interact with each other. We want to increase the level of accountability and trust between the community and law enforcement. We also want to see those who participated today to spread the message within their neighborhoods and law enforcement agencies in an effort to strengthen our community”.

I also got a chance to speak with Miramar’s Police Chief Dexter Williams about existing strategies his police department had in place for productive relations with police officers and community members.

He replied, “The first thing you have to have is commonality on the purpose and your base strategy has to be to adopt 21st century policing, which was the framework that was instituted by the White House. There are six pillar concepts, with those six pillars you build your organization to follow each one and when you do that you now have a strategy in place to address social norms in your com-munity as well as officer behavior issues”.

This event was definitely a step in the right direction for improving minority community relations with police, but we still have a long way to go. There are deep rooted issues like generational racism in the justice system of America that weren’t really addressed by police officials during the event. However, I’m definitely always open for peaceful resolutions to systemic problems. Never forget that love is more powerful than hate, because it last longer.

Special thanks to the sponsors of ‘’The Justice Project”, the Children’s Services Council, Broward County Sheriff’s Office and the Attorney General of The State of Florida, in partnership with the Fort Lauderdale Black Police Officer Association, City of Fort Lauderdale Police Department, Legal Aid and Pepsi.

The Department of Defense released proposed rules recently targeting the practices of a broad range of high-cost lenders and prohibiting them from charging service members interest rates more than 36 percent. […]

The CBC Chair likely was exasperated with several Republican members of Congress, who spent part of the day removing a teen’s art from a long hallway with 200 art pieces in the U.S. Capitol […]