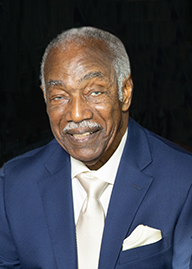 “What manner of man is this?” The question is asked to suggest that the man steps out beyond the bounds of the ordinary. What manner of man is so committed to the youth of Fort Lauderdale and Broward County that he gave over half a century, in fact, sixty-five years of his  time, talent, love, and expertise to a school and its community? Coach Robert “Bob” Green was such a man. He is a “Man for All Seasons.”

In the “Spring Season,” May 31, 1928, Robert A. Green was born to Isom Green, Sr.  and Mary Jefferson Green in Fort Myers, Florida in a small 1920’s-1930’s segregated community known as “Colored Town”, “The Bottom”, “The Black Section.” He was aware that he was born on “the other side of the tracks,” but he, his family and friends were happy.  They made a “way out of no way.”

He was the youngest of two older siblings: sister, Hazel and brother, Isom, Jr. His father, Isom, was a proud veteran of World War l. His mother, Mary the disciplinarian and guide, was

a maid on Sanibel Island. In those days, workers from her community  needed a work permit to go onto the island. Robert’s mother died when he was only nine years old.

Her death led him to fast become an independent, young man.  He earned his own money on his bicycle by delivering newspapers before going to school. He was able to purchase a scooter and eventually a motorcycle for faster delivery. He said, “I always had money. When I didn’t have money to go to the movies, I went and collected from the people who owed for their newspapers.” This was his first business. It gave him experience and confidence at an early age.

It was his athleticism that opened many doors of opportunity for him. During his years at Dunbar High  School, he was a star speedster and the fastest member of the football team in 1949. Everyone in his hometown community called him “Pompey”. Even before the greats like Deion “Prime Time” Sanders, Noel Devine, and Ernest Graham set rushing records in Fort Myers- Lee  County, Robert “Pompey” Green blazed the trail. 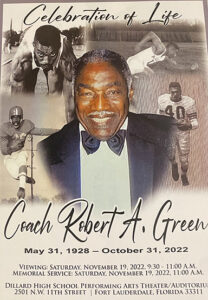 “You didn’t mess with Pompey. He was soft-spoken, but he meant business on the field,” said friend Wilma Carter. The late Ozzie Davenport told the story of Dunbar playing Dillard on Dillard’s home field in 1947. He saw a Dunbar player catching and carrying the ball like a flash of lightening. It was Robert Green. Dillard lost that game.

“Pompey did something that wasn’t being done,” said the late quarterback, Karl Morrison. Morrison wanted people to know that their generation paved the way for the later generation of “stars.”

“It is uncertain if Pompey knew how much he motivated and inspired us by his appearance in Fort  Myers. Whenever he was in town from college, the members of the football team including Fort Lauderdale’s Dr. Edwin Harvey Hamilton would rush down to the ‘Soda Shop’ to observe him,” said friend Frederick Carter.

After graduating from Dunbar, Robert, and two of his friends, Karl Morrison and James Stephens , accepted athletic scholarships to Allen University in Columbia, South Carolina where he gained more honors as the fastest football player and top scorer on his college team. He also mastered his speed on Allen’s track team where he won the  SIAC Championship in track two of his four years in college. He was invited to the Olympic trials in 1952, in  Oakland, California. Though he was not able to attend due to lack of sponsors, he could easily have come away with a gold medal.

Another part of this rich “Summer Season” was his experience in the U.S. Army. Here he continued football and  track. These events allowed him to travel from coast to coast receiving many medals and letters of commendation   from ranking officers. He tied the world record in the 100-yard dash trials, running it in 9.3 seconds. This did not go  into the record books because officials said, “he was aided by wind at his back.” He came back to win the finals in 9.4 seconds to prove that his feat was no accident.

While in the Army, Robert received offers from the Green Bay Packers, Pittsburg Steelers, Chicago Bears, and Cleveland Browns. He chose the Browns who were National Champions at the time. He was the first player from  Fort Myers to join an NFL team. After his time with the Browns, he began an extensive career in education in  Arcadia, Florida.

His 3rd year of teaching began at his beloved Dillard High School during the 1957-58 school year. During his 35 years at Dillard, he accomplished much as a teacher, coach, assistant administrator, and athletic director. One of his accomplishments at Dillard was to break the racial barrier in track and field in Broward County. He was the first African American coach to participate in a Broward County Track and Field Clinic for coaches. He and the  Panthers were also the first track and field team to participate in an integrated track meet in Broward County in 1967-68.

“The circumstances surrounding this meet had a peculiar beginning,” said Coach Green in an interview. “l attended  the Gold Coast Conference (segregated at the time) solely as an observer. When it came time to begin arranging schedules, the South Broward coaching staff walked over to me and asked if I would be interested in meeting them on a home-to-home basis.” Like the college and Army sprinter he had been, Coach responded quickly.

Track was not his first assignment at Dillard. He taught science and was an assistant football coach to Ted Primus.  At the same time, he assisted Coach Robert “Bob” Thompson with track. He became head track coach in 1961.  While at Dillard, Robert spent his summers working on his master’s degree at Indiana University and earned his degree in the summer of 1963. In 1977, he became Dillard’s athletic director after the late Horace “Bubba” Lewis  retired. Coach Green was committed to Dillard and the Dillard community. He supported Dillard’s teams in all  sports along with other outstanding programs available to students through academics, technology, performing arts, and other specializations, even down to the present under the leadership of Mrs. Casandra Robinson and  the dedicated teachers and staff. He was a proud Panther to the end.

In the “Fall Season”, he retired from Dillard High School. This led to changes in his activities, but there was  no stopping him. Although retired for almost 30 years, he continued to travel with the boys’ and girls’ basketball teams with Coach Johnny Alexander, Sr., Sgt. William Harris and other supporters to places like Anchorage, Alaska; Los Angeles, California; Chicago, Illinois; New York City, Las Vegas, Nevada; St. Louis, Missouri; and Bethesda, Maryland. Though the pandemic slowed him down just a little, he kept up with activities and successes in the community. He chaired the very first Dillard All School Reunion, “All Arrive in ‘95”. More than 1200 alumni attended. He chaired the Kappa Alpha Psi Foundation Scholarship Committee in which he personally donated scholarships to students throughout Broward County. He was an active member of Dillard High School’s Facilities Task Force, which participates in the acquisition and updating of facilities at Dillard. He was a member of the City of Lauderhill’s Florida Caribbean Games Committee and a major contributor to the African American Library.

In this season, he took time to travel extensively and enjoyed his vacation home in Central Florida. Right up until  the day of his death, he was one of the most active 94-year-olds ever. Coach Green is featured in a book authored  by David A. Dorsey titled: “Fourth Down in Dunbar.

And now in this “Winter Season,” we warm ourselves with memories of all that he stood for and taught us with his life course. He humbly credits his accomplishments in all the “Seasons of Life” to God and having a strong family unit which includes his biological family and his supportive, loving friends. He recently said to his adopted son, John “JORO” Robinson, “You think you know everything about me. I’ll bet there’s one thing you don’t know about me.” JORO asked, “What’s that?” Coach Green answered, “Before I go to bed, I am on my knees talking and praying to God EVERY NIGHT and my knees don’t hurt because I have NO arthritis! None!”

What an outstanding legacy with praises to God.

Gallery of over 200 plaques, trophies, and articles for service to the community.