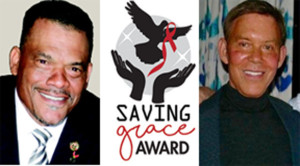 The World AIDS Museum & Educational Center, Vitas Healthcare, and The Westside Gazette presents, ‘Saving Grace’, a multimedia exhibit on the impact HIV/AIDS has had on the Black community

“I can’t emphasize it enough that HIV/AIDS is NOT AN ALONE DISEASE, so why should we allow those who are living with the virus to live and love alone? We must join together all of us and fight for our loved ones.” Bobby R. Henry, Sr., publisher, Westside Gazette

The World AIDS Museum and Educational Center, in partnership with the Westside Gazette, presents, “Saving Grace”, a new, multimedia exhibit confronting the HIV/AIDS epidemic in the Black community. This exhibit and opening reception will take place on Thursday, April 28, 2016 from 6:30-9 p.m. at the Old Dillard Museum located at 1009 N.W. Fourth St. in Fort Lauderdale. Five local people who are soldiers in the war against HIV/AIDS will be honored with the “Saving Grace Award”, sponsored by Vitas Healthcare.

Part of the event will feature stories from filmed interviews with nearly 20 members of the Black community who live with or are deeply affected by HIV. Noted San Francisco photographer, Duane Cramer, will display photographs and stories of nearly 40 other individuals. Some are famous, some are local; all are affected in some way. The exhibit will also feature HIV/AIDS-inspired poetry and art by local Black artists and writers, and a family tree illustrating the profound and far-reaching effects of HIV/AIDS on families.

The World AIDS Museum and Educational Center opened two years ago, according to CEO Hugh Beswick. Beswick hails originally from Pittsburg, Penn. He shared his testimony of how he battled back from near death and now is helping to save lives along with others in this community.

“In 2003 I was diagnosed with AIDS and became very ill with related things—Non-Hodgkins Lymphoma, a year of chemotherapy, broken bones from all the prednisone, diabetes and much more. At one point I was so near death that my family insisted that I sell my home, got me 24-hour care (I was in a wheelchair) and eventually I surprised myself and everyone else by recovering. Today I’m restored to full health and acting as CEO of the museum has given me a new career (less money but that’s a small thing) which provides a wonderful platform to be of real service.”

The Northwest section of Fort Lauderdale is a very close knit community and as such, its residents are well aware of the tragic impact and tremendous toll that the HIV/AIDS epidemic has had in the predominantly Black community. A large majority of residents have been either directly or indirectly impacted by the disease or at least know someone who has succumbed due to complications of AIDS.

“Because of the fear and stigmatisms associated with this disease, we wanted to show how far-reaching HIV/AIDS is in communities. HIV/AIDS is not an alone disease; it disrupts and can destroy families,” stated Bobby R. Henry, Sr., publisher of the Westside Gazette.

Henry went on to say, “I want the community to see that people, real people, no matter the status, color or sexual orientation, HIV/AIDS affects us all. If my family can bare, if you will, on all levels, the pain of the loss of loved ones – brother, cousins, aunts and the ugliness some people associate with AIDS, then maybe others will do the same and a real healing begins.”

Community Activist Yolonda Reed, who was diagnosed in 1989, agrees with her father. “As a person positively living with HIV, it hurts to realize that, after 35 years, stigma in our community is still so commonplace. There is too much information out on HIV/AIDS for people to continue to hide their heads in the sand about HIV/AIDS or judge those of us who are living with this disease. Black people don’t judge diabetics, people with cancer, heart disease or any other disease, so why should we be treated differently? I’m hopeful that this event will be the start of an ongoing healthy dialog in our community.

“What’s even more hurtful is that, with all of these resources available (treatment, support groups, advocacy, etc.), our numbers continue to increase. I am eternally grateful that God blessed me with strong family support and love. I credit that same love and support for my being here today, fighting in this war. That’s how I came up with the hashtag, #LoveIsGreaterThanStigma.”

Community leader Dr. Rosalind Osgood knows all too well of the devastation that the virus has taken on the community. She lost a family member to the AIDS virus.

“I got involved with the work with HIV to work with those infected because of my biological father, who I actually did not know until five years before he died. I did not have a relationship with him but I was able to find him while he was incarcerated and began to be his pen pal and began to build a relationship. He got out of his incarceration and disclosed to me that he was HIV positive and he also was battling with substance abuse. At that time I was able to get him into the Broward House.

“Eventually he relapsed and went back to jail and ended up in a facility in Orlando without telling anybody where he was and without disclosing that he had moved from having HIV to having full blown AIDS. He would eventually die in that facility alone. I got a call one night from a man who had searched through my dad’s stuff and found my contact information and called me and told me my dad had been in this facility for two years and he had been rushed to the hospital the night before and they didn’t think he was going to make it. By the time I got to Orlando my dad had already died.

“So I made a personal vow to myself that I was going to spend the rest of my life making sure that somebody that was HIV positive never had to die alone or with the lack of support. So I’ve been very involved with AIDS ministry at our church, The Angels of Hope.”

Broward County has had the dubious distinction of being one of the nation’s leading areas hardest hit by the HIV/AIDS epidemic. Here are some of the staggering HIV/AIDS statistics reported in the state of Florida and Broward County.

All of these factors make it that more imperative that the community does all it can to educate residents on the importance of early detection by getting tested. The old adage which states, “forewarned is forearmed” holds true. The sooner those infected by the virus learn of their HIV status receive proper medical treatment they have a better chance at having a better survival rate.

First Black woman to graduate from MIT with a Ph.D. in Nuclear Engineering

Black girl magic was in full effect earlier this month when Mareena Robinson Snowden became the first Black woman to earn a Ph.D. from MIT in Nuclear Engineering. […]

‘The primary symbol of Advent is the wreath’

‘The primary symbol of Advent is the wreath’

Rest in Peace: Local Leaders Step Up to Protect the Sacred Remains of the ‘Sugar Land 95’

The discovery of the remains of the ‘Sugar Land 95’ victims, the majority of whom are believed to be former slaves who were a part of the state of Texas’ controversial and inhumane convict-leasing system, could have been unearthed well before the contractor found the remains if people chose to listen to community activist and historian Reginald Moore from the beginning. (Photo: DefenderNetwork.com) […]