“We want people to understand that we are in no position to put our children’s lives in jeopardy by selling out to any corporation”. Janet B Taylor former Clewiston Commissioner.

This will be a three part series on US Sugar and its relationship with life in the Glades.

After running advertising in the Westside Gazette, I was invited to come over to Clewiston, Florida, which is a part of the Everglades Agriculture Area consisting of the rural towns of Belle Glade,  South Bay, Pahokee and Moorehaven. The term the Glades and the Muck could be used interchangeably because it all refers to where these small cities sit: on top of some of the most rich, fertile, farm land in the world. My visit included a tour of one of US Sugar’s refinery. This visit was prompted after some concerns about stories and opinions that had been printed on US Sugar. Stories about the poor air quality that comes with the burning of the sugarcane, the polluting of Lake Okeechobee with runoff water from the farms and other mishaps from US Sugar on the health of the citizens of the Glades.

What I read and had been hearing about US Sugar and its exploitation and disregard for the health and welfare for Black lives, including their businesses in the surrounding areas, really concerned me for several reasons.

As a youth my family and friends would ride over to Belle Glade and surrounding areas, affectionately called the Muck, because of the rich fertile soil, to fish for specs on Lake Okeechobee and in its rim canals. At times we would go when they were burning the sugar cane fields and I would see workers in town getting themselves ready to go to work. This site was something that reminded me of the early photos and movies from times on the farms when Black people used to get up and get dress to go into the fields to work. I would see men and women dressed in many layers of would have on headscarves under hats old and torn dresses with pants underneath them and worn-out sweaters standing around fire barrels to keep warm while waiting on buses to come pick them up and take them to the fields. As a young boy this really stuck in my head coming from the city to see this vision. It was quite remarkable and astonishing that in the 60s and 70s this was still a scene remnant of times gone by.

As I thought to myself maybe just maybe those stories and opinions were written from the past without research or conversations with the people and not relevant to the current state of what was occurring on the Muck-now. I was thinking how they could be true when all of the athletes, professional athletes that have come from this area how could it be that they would allow things to happen or continue to happen that would be detrimental to their families how could this be. You know you hear stories about the great athletes and doctors and professionals who come from the Muck if you will, how could they sit back and allow this to happen? I remember hearing stories about how the athletes used to run rabbits down when the fields were set on fire and I can remember a story from Dr. Hamilton who once said while traveling back from Belle Glade to Fort Lauderdale after rendering services his car broke down and how the people rushed to help him and didn’t charge him one thin dime. How can such a loving community fall victim to a corporation that they worked for and have stock in, to destroy their community? 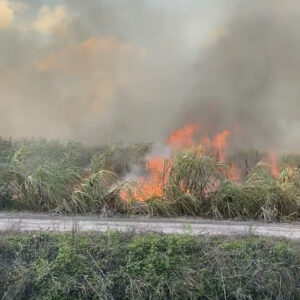 Well, I wanted to find out for myself and here was the opportunity. Once I got over to Clewiston, I met with US Sugar’s top corporate communications people and community relations manager respectively Judy Sanchez, Ryan Duffy and Brannon Thomas. Each one of US sugar staff was extremely knowledgeable and well-versed in the story of US Sugar and its founder and the community in which they served.

After giving me a brief history of the current headquarters building and the lay of the land, we proceeded to the sugar refinery. Not to bore you with all the details I will suffice by saying that it is a self-contain ecological atmosphere were even the by products are used to create renewable energy and some of that product called bagasse kept in an environment that  has been constructed with the communities health concerns and safety in mind with precautions put into place. I found out that the refinery was here before the community of Harlem was. I would advise that for further understanding set up a tour for yourself and visit US Sugar. Because of COVID there are some limitations however visit their website it has an extensive look into what is going on. Nevertheless after seeing the process from the field/farms to the plant to where sugar is stored before it’s actually made into sugar, I was thoroughly impressed. Throughout the fields there were charts that indicated air quality and water conditions even the directional flow and amount of water was charted and maintained on a consistent bases. There are all kind of instruments, gadgets and technology to make sure proper conditions for the environment and for the people were adhere to. I think one of the highlights of the trip for me was to actually see a controlled pre-harvest sugarcane field sat on fire, technically called a burn. What I really want to emphasize here is how US Sugar has use natural ways for sustainable solutions of dealing with the environment. For instants using barn owls to keep the fields clear of rodents that can harm the sugarcane, they’re like a natural exterminator literally. The automation of the entire process is of a technological advancement far superior than what’s out in Silicon Valley. The entire system of farms are plotted and grafted where each harvest machinery tractor-trailers and trains are on a grid that is far superior to some of our transit systems you have to check it out for yourself to get a better understanding. Standing at the burn site being no more than 20 yards from the actual burning of cane, I stood in amazement. I could feel the heat and hear the crackling of the cane leaves as if I was sitting next to a camp fire. The cane was being burnt but I was not overwhelmed by the smoke nor did my clothes inherit the smell of smoke.  I saw rabbits running along with rodents coming out of the cane.  I was so amazed at how this process was scientifically done, that I was not breathing in any smoke from the burn from it and it happened so fast again you have to witness it for yourself. After the burn I watch the process evolved. The harvester came through cut the stocks at the same time filling the bins on tractors then once the tractors were filled it moved on and another one came and took its place. The one that was full went to the conveyor in the field where it dump the load. As the trains were filled they took it to the refinery dumped it into the bin and the processing began. All of this occurred because of the new technology used. Each step of the process was done with the community, the workers, the environment all concerns where addressed each step in the process was thought out in detail. From the air quality the water quality coming in and going out back into the fields, this process again was done with the component’s welfare that would be affected by US Sugar operations.  Having answers to my questions as it pertains to health of citizens, jobs, environment and future commitments to bring in Black educational institutions other than the traditional  ones they had, I was ready to use my day on the Muck. We ate lunch at a local restaurant who’s work force was just as diverse as the community and the food was delicious. Customers in the Banyan Tree restaurant knew the people from US Sugar which was a good sign for me to say that they are in the community. As a matter fact when I was relaying my vision of what I saw as a kid coming to Belle Glade it kind of made Ms.  Sanchez a little upset. She tried to hide it but because of her love for her community she spoke up and said unapologetically and I quote, “those people you saw standing out there  have pride they went to work every day and they are good people.” I had to reassure Ms. Sanchez that I was not belittling anyone and that I understood but that showed me that she was concerned about her community. After lunch I was off to a meeting with the community to see how the answers parallel to those that US Sugar executives gave to me.