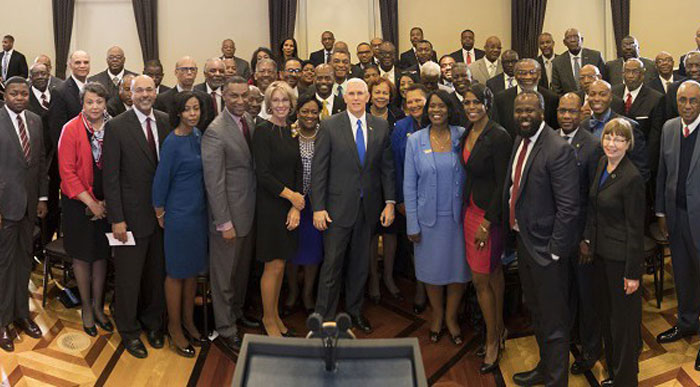 Declaring their admiration and support for the mission of historically black colleges and universities, US President Donald Trump and several White House staffers told dozens of HBCU presidents and chancellors that a new executive order would likely be revealed tomorrow afternoon during the second day of the ‘HBCU Fly-In,’ a rare advocacy convening between the campus executives and the White House, its staffers and Capitol Hill Republicans.

Omarosa Manigault, director of communications for the White House Office of Public Liaison, made the announcement during the meeting, prompting applause from the presidential assembly and preceding a cadre of executive appointees lauding the impact of black colleges on the higher education and industrial landscapes.

“It’s a little more complex than we anticipated, but the president made it very clear to just get it done, and so we are going to get it done,” Manigault said.

The executive order, the development of which many advocates say has been among the most progressive partnerships between the White House and HBCUs in decades, could reveal new standards of funding and federal support for black colleges, including moving the White House Initiative on HBCUs under the purview of White House administration and mandatory funding benchmarks from federal agencies for grants and contracts.

President Trump, who addressed the delegation as a “beautiful group of people’ doing ‘tough and important’ work during a group visit to the Oval Office, headlined the afternoon meeting with more than 80 campus leaders, who discussed policy making and high-impact opportunities for black colleges to build programs and capacity through strategic investments from federal agencies and funding lines.

Education Secretary Betsy DeVos, who cited her visit to Howard University as a tremendous introduction to the extensive training and development done at HBCUs, told the group that they should be ready for an active partnership with the White House.

“A key priority for this administration is to create opportunities for communities that are often the most underserved. It’s time to shake things up,” DeVos said. “You are the real pioneers when it comes to school choice. You are living proof that when more options are provided, greater access and greater quality follow.”

“The path has not been any easy one, and your students and faculty have stood firm through transformational times in the nation history. You’ve helped lead our country toward a more perfect union,” he said. “America is unquestionably stronger because of the institutions represented here. Beginning today, this administration is committed to making sure that HBCUs get the credit and the attention they deserve.

“Anything that the Trump administration could do to channel more federal dollars in form of grants and contracts to and through the HBCUs would really benefit our institutions and in many cases, our communities, as well,” Bowie State University President Mickey L. Burnim told the Associated Press.

“We had the opportunity to hear from the White House affirming the HBCU mission as a vital part of the nation’s educational and workforce strategies,” said Shaw University President Tashni Dubroy. “The Vice-President specifically addressed the critical work of educating first-generation college students, providing access to marginalized communities and shaping the domestic agenda. Those were resonant points which we look forward to developing in the coming months and years.”

According to the agenda, the two-day meeting was designed to foster introductions between HBCUs and President Trump, along with Republicans Rep. Mark Walker (R-NC), Sen. Tim Scott (R-SC), and House Speaker Paul Ryan. Rep. Cedric Richmond (D-LA) is also scheduled to address the group tomorrow morning.