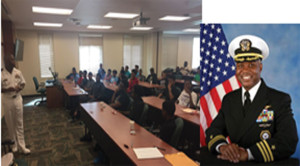 It’s not every day that you have an opportunity to meet a real life American hero, but that’s exactly what occurred when  U. S. Naval Commander Nathan J. King addressed a group of attentive mentees from the 100 Black Men of Greater Fort Lauderdale’s Leadership Academy at Nova Southeastern University in Davie, Fla.

Cmdr. King’s story becomes even more remarkable when you’re made aware of his humble beginnings in the farm belt of rural America, where the agricultural industry pretty much dictates a great deal of what local residents do for a living.

As a child growing up in the South, King used to watch fighter jets fly overhead from a nearby base in Memphis, Tenn. Little did he know that one day he would join the military, let alone become a U.S. Naval pilot. His story becomes even more fascinating when you take into consideration the tremendous odds he faced as he journeyed to fulfill his dreams in life.

Cmdr. King’s assent to become a member of an elite group of individuals, a U.S. Navy fighter, personifies what an individual can accomplish if they’re willing to work hard, persevere, and refuse to quit. Cmdr. King knows a thing or two about overcoming obstacles in life and that’s the fascinating story he shared with the Leadership Academy.

“The 100 Black Men of Greater Fort Lauderdale was very fortunate to have Cmdr. Nathan J. King share his military experience with our mentees.  Often our young people are not aware of the educational opportunities and bene-fits afforded through our military branches. Cmdr. King is a prime example of how someone not sure of their career path after graduating high school can obtain a college degree, become a pilot and a leader in the United States Navy,” said Dennis Wright, president of the 100 Black Men of Greater Fort Lauderdale.

“Cmdr. King’s message of “Your desire for success has to be greater than your fear of failure” resonated extremely well with our mentees.  Success is available to anyone, regardless of your circumstances, as long as you have the desire to succeed,” added Wright.

“Cmdr. Nathan J. King’s presentation at the 100 Black Men of Greater Fort Lauderdale Leadership Academy spoke volumes! It was a very inspiring event. Such as I, Mr. King grew up in an impoverished environment in which he had the opportunity to escape. Through him joining the Navy, he was able to unlock his God-given talents through various positions and educational opportunities within the military,” said Senat.

“The success that Mr. King has gained was not simply handed to him on a silver platter; instead he has worked extremely hard for them which have been clearly demonstrated throughout his life. He has earned these successes through his hard work ethics, not wanting to be susceptible to the environment in which he was raised, and knowing that he wanted to continue standing by the morals and values his parents instilled in him he rose to the top. He persevered through his tough times and came out to be a well-rounded individual, who in-spired me with his life story and the way he used his intelligence to navigate around obstacles he faced in life,” Senat added.

WG: How does a young African American growing up in a small town in Arkansas grow up to be a Commander in the U.S. Navy?

King: “I would have to at-tribute it to my work ethic and my desire to pursue higher education. Although my parents couldn’t afford to send me to college, my parents had instilled a high degree of work ethic in me and the importance of pursuing higher education. My pa-rents couldn’t afford college, so I joined the Navy to get the GI Bill to later pursue college, see the world, and get a skill. Once I arrived at recruit training, I quickly realized that I was a-round a lot of smart people and I was probably never going to be the smartest guy in the room, so it made me work harder and the hard work paid off.

My career started out on submarine duty. I would observe the officers I was working for and say, “I can do that guy’s job.” I knew that one of the qualifications to be an un-restricted line officer was to have a bachelor’s degree. As I continued to work harder, all those opportunities that my recruiter promised me became obtainable. I was able to get into an Associate’s degree program and later get into a Bachelor’s degree program, receive my commission, and got accepted into flight school. I have had to continue to pursue higher education to promote at every level and have also obtained two Master’s degrees. I have always worked hard, and I never shied away from a challenge. I’ve al-ways taken the hardest job assignments that were avail-able to me, knowing that if I performed well, that I would have the best opportunity to get promoted and it has worked. In addition, I have worked with some great people in the Navy who have invested in me and my career.”

WG: What has been your biggest challenge during your career in the military?

King: “I think my biggest

challenge was getting through flight school. When I started flight school, I was 31 years old and I didn’t know how to swim, so this was a major obstacle for me. So I had to overcome the water survival obstacles as well as the academics of flight. I took swim lessons for four hours every day until I could pass all the water survival tests. The final test was a mile long swim in my flight suit non-stop.”

WG: What do you consider your proudest moment and some of the highlights during your career in the military?

King: “I am extremely proud that I am able to serve my country for now almost 32 years. The proudest moments in my Navy career were obtaining a commission, qualifying for my highly-coveted “Wings of Gold” Naval Flight Officer wings, and the ultimate has been taking command of Navy Recruiting District Miami. There is absolutely nothing better than being able to lead sailors and make a difference in their lives and their family’s lives. I also, in addition to deploying for the Cold War and Operation Enduring Freedom, I had the opportunity to deploy to Haiti after the earthquake in 2010 in support of operation unified response.”

WG: What was it like to actually experience combat as a Naval Flight Officer in the U.S. Navy?

King: “When I was a kid I would see jets fly over my front yard and I never imagined one day flying, let alone flying combat missions. I had an opportunity to fly 68 combat sorties during Operation Enduring Freedom. My flight days were about eight hours long. I would do an hour and a half intelligence brief before the flight, fly a five-hour mission, and then do an hour and a half debrief after the flight. These missions were done during a six-month deployment to the Arabian Gulf flying off of the aircraft carrier USS John F. Kennedy (CV-67). To leave your family behind and go fly these missions made me feel like I was doing my part to support something much bigger than I, our freedom and our way of life.”

WG: How have you grown as a person as a result of your experiences in the U.S. Navy?

WG: What advice would you give to young people about how to overcome obstacles in life to achieve success?

King: I think your desire for success has to be greater than your fear of failure. You have to remain focused on your goals and you have to believe in yourself and believe that you can achieve your goals. You can’t allow setbacks, obstacles, or temporary failures to kill your desire for success. Most of us are going to have obstacles that we must overcome at some point in our lives. When I was in the sixth grade, I had a teacher tell me, ‘Excuses are nothing but lies.’ That always stuck with me. It took me a while before I fully understood what she really meant was that ‘Excuses are nothing but lies, but you are really lying to yourself.’ I am a firm believer that you can have the best excuse in the world, but only the result is what matters! I am more concerned with having a good result than a good excuse.”

WG: Where are you scheduled to go for your next assignment and what are your plans for the future?

King: “I am scheduled to go to Japan for my next assignment. Hopefully, I will be able to continue to serve for at least five more years. Once I retire, I plan to work for a non-profit or volunteer with kids. I love talking about leadership, so maybe I will do some workshops on leadership. I would like to continue in some type of public service to continue to have a platform to give back.”

Commander Nathan J. King is a native of Helena, Ark. He enlisted in the Navy’s Delayed Entry Program in March 1984 and reported for Recruit Training in Great Lakes, Ill. in July 1984. After completion of A, C, and Basic Enlisted Submarine School, in February 1986, he served as a Machinist Mate on board USS Key West (SSN 722). While serving aboard Key West, he deployed several times in sup-port of the Cold War and other operations and was named Sailor of Year in 1990.

In May 1991, he transferred to Navy Recruiting District Atlanta, Ga., and was named Navy Recruiting District Atlanta’s “Recruiter of the Year,” and was subsequently advanced to Petty Officer First Class through the Recruiter Meritorious Advancement Program. In July 1993, he was selected for the Enlisted Educational Advancement Program and enrolled at Georgia Perimeter College in Atlanta, Ga. and received an Associate’s degree in Business Administration.

Cmdr. King was selected for the Enlisted Commissioning Pro-gram and enrolled at Georgia State University in August 1995. After completing a Bachelor of Business Administration in Finance and a Bachelor’s of Business Administration in Marketing, he was commissioned through the Navy ROTC program at Georgia Institute of Technology in August 1996. He reported to NAS Pensacola in August 1996. In March of 1998, he reported to VAW-120 Grey-Hawks. After receiving his Wings of Gold in VAW-120, he reported to VAW-121 Blue-Tails, where he served as the Ground Safety Officer and the Aircraft Division Officer.