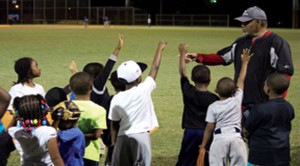 Walters’ dream is to bring baseball back to the inner city

“Baseball is a part of the Black culture,” said coach and founder of Kings Youth Baseball program (KYB), Matt Walters. “For a long time, church and other things were done around baseball and with the help of the Marlins Reviving Baseball in Inner Cities (RBI) program to boost interest in baseball, we will be better able to give back to the game of baseball and our community in a positive way,” says Walters.

Walters grew up loving baseball, introduced to him by his grandmother. He started playing baseball at Sunland Park, now Carter Park, at a time when baseball was very influential in Broward County, with teams like the Hollywood Redbirds and the Fort Lauderdale Dodgers.

“In our community, baseball was a big part,” said Coach Walters, and with the KYB program he plans on bringing the sport back to his community.

The KYB program brings together players from Lauderdale Lakes, Lauderhill, and Fort Lauderdale during the spring season to prepare to play with the RBI summer team. The player’s ages range from 13 to 18 with a Junior RBI team of younger players, ages six to 12.

Coach Walters states that “The support of the Marlins is needed for the programs to continue. “They give us technical support for our coaches and players and help us with equipment needs. We have partnered up with them to produce ballplayers that get to represent their communities.”

You can find the teams practicing now at Osswald Park where I met former player and assistant coach for Walters, Brandon Williams.

Williams currently plays baseball for Plantation High School but played in the KYB program, and gives Coach Walters huge credit for his continued interest in the program. “When I didn’t want to play anymore he picked me up. I remember being asleep in bed hearing Coach knocking on the door ready to take me to the field. He was the one who brought me to the baseball world,” Brandon said.

Williams’s involvement in the RBI program gives him hopes of receiving a scholarship for college. “I’ve been a part of the program for three years and the exposure is great. It’s a way for schools to know your name and see your game.”

Walters’s vision for baseball has not only touched players but parents as well like Brian Little. Little says, “Coach Walters is trying to build a program in the community working with the kids and trying to get more parents involved.”

Another parent to Coach Walters’s players, Tamejra Sumpter, also can see his vision. “Coach Walters is what got me into the program. I believe in his vision. He is very passionate about the kids and reviving baseball in his community.”

Matt Walters’ love of baseball and his vision for it to survive and thrive in his community is beginning to flourish. If the KYB program continues to grow he would like to add to it a mini-camp as well where you would be sharpening your skills as baseball players, get some exposure from high school and college coaches, plus receive some life advice, but only time will tell.