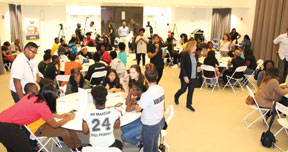 MIAMI, FL — “We wish it would have lasted a little longer”, a common sentiment declared by young people who attended Urgent, Inc.’s third Youth Town Hall Meeting entitled, “Bridging Policy, Youth Voice and Community Change.”  It was held on Oct. 29, 2016 at the Overtown Performing Arts Center in Miami, Fla. There were approximately 66 young people, ages 14-24, adults and dignitaries in attendance as well as representatives from the sponsors: The Children Trust, Southeast Overtown Park West Community Redevelopment Agency and Miami Dade County.

In a community like Overtown, where resident voices often go unheard, it is easy to see how the youth of the community feel they don’t have a voice to impact the needs of the neighborhood.  However, on October 29th, their voices were not only heard, but “their voices mattered,” said moderator and media innovator Peter Bailey, creator of the critically-acclaimed NiteCap with Peter Bailey series.  “I may be telling my age now, but when I was growing up, we didn’t have the Internet or social media or even activities like today.  You hold the power of expression in your hand.  Use it!  The time is now and this is a safe place to use that power.”

Prompted by the hashtag ‘YourVoteCounts2016’, young people had the chance to vote using a sticky note on the issue that provokes the most concern.  On each wall, there were large pieces of paper with one of four titles above them:  Housing Safety/Youth Homelessness, Community Safety, Education and Employment.  Housing Security/Homlessness garnered the most votes, but not by a landslide.  The other issues were a close second, third and fourth.  Immediately following the vote, Peter Bailey guided a discussion with Youth Moderators LaVontay Thompson, Erica Del Villar and Elijah Calderon.  LaVontay asked “Why can’t we have more jobs for the youth?” while Elijah wanted to know “ways to help students with financial issues trying to afford college.” After the thought-provoking question and answer exchange, spoken word artists Deondre Marshall and Angene Bin Aime recited poetry entitled “Senses” and “Bullets” respectively. The youth moderators and artists are members of Urgent, Inc. Rites of Passage Youth Media Project and Film, Arts, Culture and Entrepreneurship (F.AC.E.) Programs.

Immediately following the group discussion, there were breakout sessions co-facilitated by local adult leaders, University of Miami Master’s students in the Community and Social Change Program and Miami-Dade County Youth Commissioners, one of whom was Shaunteria Guerriera, the current Chair of the Youth Commission.

City of Miami Commissioner Francis Suarez was able to choose the subject matter he was most passionate about, and he jumped at the chance to engage the youth on Community Safety.  “Youth violence is a very big concern for me.  It’s a big issue and we have to address it.  I want to hear the young people’s views and opinions.”  He took a seat among seven young people that included Aaron Willis, a 19-year old who was shot in the back while riding a bicycle and is currently paralyzed. Miami Dade County Deputy Mayor Russell Benford and County Commissioner Xavier Suarez were also active participants in the sessions, lending an ear and words of wisdom when needed.

This is the first of a three-part Community Expo series intended to inspire students to conceptualize policy solutions that address their pressing issues. This was the first day of a movement allowing young people to use their voice to make a difference. Eventually, the solutions developed will go to policy makers to educate them about the issues and effect change.  The next Expo event is scheduled for March 2017 during the annual This Woman’s Work Event where there will be further discussion and continued momentum around crafting policy for change.  F.A.C.E. program interns will film each event.

Annually, the Youth Town Hall Meeting has been part of Urgent Inc.’s Youth Economic Development Conference where local youth engage in critical conversations with community leaders, elected officials and institutions whose activities shape their lives and future.  Saliha Nelson, Vice President of Urgent, Inc. remarks, “We felt it important to provide a platform for youth to understand how government and institutional policy shape the experiences of youth and families. Often we hear that young people don’t care about voting or getting involved in their communities, I can tell you that our youth do care but need more opportunities to engage meaningfully in the process and that’s what our series of town hall meetings are designed to do.”