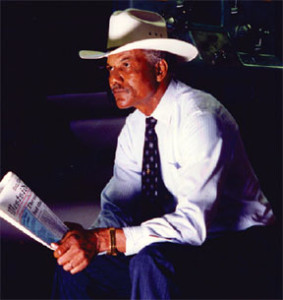 Levi Henry, Jr. is a legend in his own time. Still unbowed in his early 80s, the charismatic leader with the dazzling smile helped to seed many of the advancements enjoyed by Broward County’s Black community today. With a passion for “liberty and justice for all,” he simultaneously helped make the County a better place to live and a desirable destination for countless millions of visitors from around the world over many years.

The 2016 Inaugural Levi Henry, Jr. White Hat Award will be presented to Mr. Henry and several honorees at the Broward Center of the Performing Arts on Sunday, Aug. 7, 2016, beginning at 4 p.m. The event is co-sponsored by the Westside Gazette newspaper celebrating its 45th anniversary and the Sickle Cell Disease Association of Broward in its 39th year.  Mr. Henry was instrumental in the creation of both.

Mr. Henry’s lifetime of contributions to Broward County and South Florida are the stuff from which a western movie could easily be made. His swagger and insistence on the Black community being treated with respect frequently brought him up against the white power structure in the county from the mid-70s.

His primary tool to help accomplish human rights and economic parity was the Westside Gazette newspaper, which he established in 1971. Rumor has it that when he asked the local white newspaper to retract an error they’d printed about him, they refused. So Levi started his own newspaper utilizing his sales and reporting talent, the editorial skills of his wife Yvonne, and the talents of his extended family. Focusing on positive developments in the Black community from Broward to Miami Dade, the Gazette forged a niche and became the paper of record for that population. It has appeared continuously every Thursday since 1971.

As healthy red blood cells oxygenate the body and bring life, the Gazette became a community empowerment organization, pumping the needs of Black lives into issues of business, politics and philanthropy. One early result was the formation of the Sickle Cell Disease Association of Broward County.

“Because I had the newspaper, people started coming to me and telling me their stories,” he recalls. “A lady came and told me that she had a child with sickle cell anemia, and how expensive the medication was. She wanted me to let people know about the disease, and if we could help her pay for the medication.”

They didn’t know it at the time, but the inherited disease destroys red blood cells, is extremely painful and debilitating and more than 70,000 people in our country suffer from it. Levi says he and his Yvonne, (now deceased) editor of the Gazette, joined with their new friends Frank Peterman and his then-wife Cheryl, who’d recently moved to the area and were looking for opportunities to help make things better.

“There were several others involved, including Dr. Astrid Mack. We went to his office and decided what we’d do. We formed the organization and we kept publishing about it to get more knowledge into the community.”

To date, the association has served thousands of patients and families giving them mental, emotional, physical and financial support.

Levi was just beginning. With the Gazette as the concerted voice of the Black community, he began to publicize the need for change.

“I just could not stand the way they were treating Black people,” he recalls. “I had to do something about it.”

The stories in the Gazette attracted the attention of local white press and television. With the paper distributed at City Hall and through the business community in Fort Lauderdale, Levi recalls a TV reporter asking in a commission meeting, “‘Do you think his paper has any power?’ This commissioner said, ‘No, not really.’

In the ‘80s when a young Black schoolgirl asked Fort Lauderdale Mayor Bob Cox  what it took to become mayor and he told her you only had to be “free, white and 21,” Levi suggested that the mayor pack his bags.

“I told him we were not going to need him any longer. He didn’t get re-elected the next season.”

The story he printed went around the country and attracted the notice of the federal government, he says.

“Local TV and the papers came down on me, but I had the evidence because the custodian at the School Board brought the tape to me of the mayor saying that. My lawyer, Henry Latimer, kept me safe. In those days Alcee Hastings (now a longtime Congressman) was writing a column for the paper called, ‘Liberty and Justice for All.’  And I was part of the wade-in on Fort Lauderdale Beach to desegregate the ocean. We were all determined to improve conditions in our com-munity.

“We helped start the Police Community Relations Board and there was a police substation on Sistrunk Boulevard, right in the heart of the community. That way, people could go in and talk to the police, air their concerns without having to go to the jailhouse. It was a two-way communication that helped keep the peace, because everybody could feel that they had a place to express themselves and they were being heard. We need innovative solutions today and we need tried-and-true solutions like that.”

With a myriad of other accomplishments behind him, Mr. Henry says that visiting Fort Lauderdale from the estate he retired to in North Carolina gives him a lot of pleasure.

“Just driving around, looking at the difference and the places where I had an influence is a really nice feeling,” he says.

Parting words of wisdom from the White Hat Warrior?

“If we stopped saying, ‘I got mine. Now go get yours!’ If we start helping each other, especially helping young people understand the system. Young people think ‘If you hit me, I’m going to hit you back.’ None of us is perfect, but we would be so much better if we had a relationship with each other.”

Moral courage is standing up for what is right

The evil of mass incarceration must be addressed by the President

The evil of mass incarceration must be addressed by the President
[…]