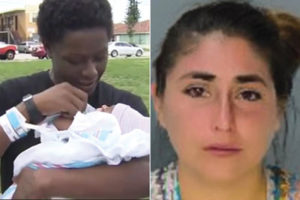 Violence against Black people by police can occur even when they are off-duty, apparently, as a white North Miami Beach police officer has been arrested and fired after allegedly kicking a pregnant Black woman in the stomach. The officer, Ambar Pacheco, had been on the job for less than a year and was under probationary status when the incident occurred last Wednesday night.

According to the police report, Pacheco was with her sister when she had an encounter with Evoni Murray and her boyfriend, Joseph Predulus. The report indicates that an argument ensued for reasons unknown, and Predulus kicked Pacheco’s sister in the face. “I saw red and beat the s— out of her,” Pacheco said of the victim, who was eight months pregnant and had a due date of August 8th.  “I never did no kicking, nothing. I never touched nobody,” said the new father. “All I did was defend my baby mother and a child. To me, I don’t put my hands-on women and that’s how it should be, especially a pregnant woman too.” Predulus believes that Pacheco was intoxicated at the time. “As I was talking to the police, I realized they were drunk, so I guess the alcohol probably kicked in,” he said.

“I observed the victim to be in severe pain in her abdomen region and possibly having contractions,” Miami Beach Police officer Alberto Castro wrote in the report. “Luckily, we had got her to Mount Sinai (Hospital) just in time because it only took seven minutes for the labor,” Predelus told CNN affiliate WSVN.  Murray and their infant son were healthy.

“The pain was really—it was shock,” Murray told WSVN. “I really didn’t have no understanding of anything. I just wanted to make sure my baby was safe … That’s something that’s always scary for a woman, to feel like your baby’s in danger because of a tragic situation. That’s a whole other traumatic level.”

“Due to Ms. Ambar Pacheco’s recent off-duty actions, her employment with the City of North Miami Beach has been terminated effective immediately,” Chief William Hernandez said Friday via his department’s Twitter account.

“She was so beautiful, so inspirational, had dreams,” Nia’s father, Amsar El Muhammad, told reporters Wednesday. “I’m supposed to be planning her graduation, not her funeral.”