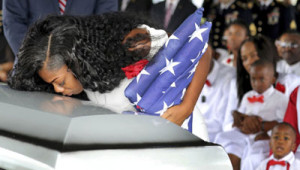 “Myeshia Johnson that is her name Mr. Trump not the woman or the Wife”—Frederica Wilson

Questions have remained about why it took two days to discover Johnson’s body. (AP)

The widow of slain Army Sgt. La David Johnson on Monday demanded answers about her husband’s death in Africa, as she refuted President Trump’s claims about his controversial condolence call to her.

“I don’t know how he got killed, where he got killed or anything,” Myeshia Johnson told ABC News’ “Good Morning America” in her first interview since the sergeant’s death. “They never told me and that’s what I’ve been trying to find out since.”

La David Johnson was one of four Army soldiers killed in the attack outside Tongo Tongo, Niger, on Oct. 4. His body wasn’t discovered for roughly 48 hours, which has left many disturbed over the response.

Johnson said she wasn’t even allowed to see her husband’s body before his funeral Saturday.

Rep. Wilson says John Kelly should apologize for lying about her,

“I don’t know what’s in that box,” she said. “It could be empty for all I know. I haven’t seen him since he came home.”

Johnson said she was denied every request to see her husband’s body.

Her condolence call with the President has been the eye of a White House firestorm over the last week.

Rep. Frederica Wilson (D-Fla.) claimed she heard part of the call on speakerphone, during which Trump told the pregnant Johnson her husband “knew what he signed up for.”

Trump has vehemently denied that, slamming Wilson’s account as “fabricated” and calling the lawmaker “whacky.”

But Johnson confirmed Wilson’s series of events, which happened as she was en route to receive her husband’s body at Dover Air Base.

“Whatever Ms. Wilson said was not fabricated,” Johnson told “GMA” on Monday. “What she said was 100% correct.”

Trump did ‘disrespect my son’ and his wife, soldier’s mom says

She said Trump called the cellphone of a master sergeant in the car. Johnson asked him to put the call on speaker so her aunt and uncle, also in the car, could hear the call.

Johnson said she cried for several reasons, especially because Trump’s remark that Johnson “knew what he signed up for.”

What’s worse, she added, was that Trump seemingly forgot the sergeant’s name and only remembered it because of a report in front of him.

“I heard him stumbling on trying to remember my husband’s name,” Johnson told “GMA.” “And that’s what made me upset and cry even more because my husband was an awesome soldier.”

Trump disputed the widow’s account about an hour after the interview aired.

“I had a very respectful conversation with the widow of Sgt. La David Johnson, and spoke his name from beginning, without hesitation!” Trump tweeted.

“We should not be fighting about a brave American who lost his life fighting for his country,” McCain said during a Monday appearance on “The View.”

He added the Armed Services Committee isn’t getting enough information about what happened in Niger.

“And we deserve it because we represent their families too,” the senator said.