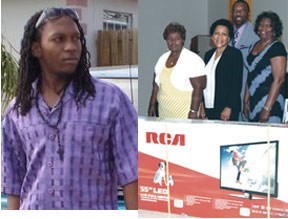 The Percell Marc Maynor Memorial Scholarship Foundation (PMMMSF) was incorporated under the laws of the State of Florida on March 23, 2012. Marc’s father decided to form a not-for-profit foundation to honor his son’s tragic death. The scholarship provides financial assistance to deserving high school graduates who desire to attend an accredited college or technical school.

“Willing Minds and Busy Hands”, were united to take a stand for higher education and academic growth of our youth and young adults is a phrase that summarizes the goals and objectives of the PMMMSF.

Marc attended church on a regular basis. He was an ex-ample for his peers. Marc demonstrated the importance of an education by obtaining a high school scholarship to Chaminade-Madonna High School in Hollywood, Fla. He excelled in the classroom as well as on the field playing football and running track.

On Sept. 10, 2010, Percell Marc Maynor passed away at the age of 23. During his memorial service he was described as a great young man with a compassionate heart, lively spirit, Good Samaritan and an outstanding athlete. These are all qualities hoped for in the current and future scholarship recipients.

The first recipient to receive the scholarship was Gregoire Carter Narcisse from Davie, Fla. At the completion of his final year in high school, he managed to earn a diploma and an Associate of Arts Degree simultaneously.

After graduation, he at-tended Florida State University (FSU) at the age of 16, where he became the youngest graduate in FSU’s history by later earning a Bachelor of Science in Political Science and Sports Management at the age of 18.

After completing his Bachelor’s degree he went on to pursue a Master’s of Science in Education with a concentration in Sports Administration at the University of Miami, where he successfully graduated at the age of 19. While studying hard, Gregoire managed to work and complete internships for various organizations such as the Philadelphia Eagles, Homestead-Miami Speedway, and Morgan Stanley. He currently works as a Financial Representative at Northwestern Mutual.

Another noteworthy scholarship recipient was Enzo Nitti who was chosen by Marc’s football coach (Coach Guandalo) as the second award winner. Enzo is from Venezuela and was brought to the United States so that he and his sister would have access to better opportunities and resources. Coach Guandalo felt this student embodied the same qualities he saw in Marc, which made him an excellent choice for the scholarship.

Recently, the PMMMSF was asked by Sandra Hunter, director of the Northwest Federated Woman’s Club of Bro-ward County to purchase a 55” color television. The officers of the foundation presented the television to the organization on Aug. 27, 2015. The presentation included Marc’s best friend, Darryl Campbell and members of Marc’s family.

If you would like to contribute to the PMMMSF please make all checks and money orders payable to Percell Marc Maynor Memorial Scholarship Inc. and mail to P.O. Box 6145, Fort Lauderdale, Fla. 33310-6145.