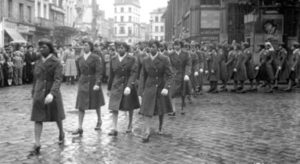 The U.S. Army’s only all-Black all-women unit during WWII was honored with a monument.

A group of trailblazing Black women is finally getting the recognition it they deserve. The women who were a part of the 6888th Central Postal Directory Battalion—the U.S. Army’s only all-Black all-women unit during WWII—were honored with a monument in Kansas, Radio.com reported.

The group—which was made up of over 800 Black women—was responsible for organizing mail in a segregated unit, the news outlet writes. They served during a time where the Women Army Corps were separated by race and women of color were rarely allowed to serve overseas.

Nearly 73 years ago, after the Red Cross had a huge backlog of mail that was supposed to be distributed to U.S. service members, the women were selected to serve in Birmingham, England to help with the issue. Prior to traveling to Europe, they trained in Camp Shanks, New York. The group was led by Lt. Col Charity Edna Adams who was the first Black woman to be an officer in the Women’s Army Auxiliary Corps. According to the news outlet, the women went through 65,000 pieces of mail during each shift. They were forced to work in unclean, rat-infested warehouses.

The monument in Fort Leavenworth features the names of all the women and imagery from their journey. Five of the women who served were in attendance at the ceremony. “Servicemen want their mail. That’s a morale booster,” 95-year-old Lena King, who was a part of the unit, told KCTV. “Within six months, we had cleared up two to three years of back mail.”

The unsung legacies of these women will live on through the monument. The dedication of the monument comes shortly after the passing of Tulsa Race Riot survivor Olivia Hooker who was the first Black women to enter the U.S. Coast Guard in 1945.