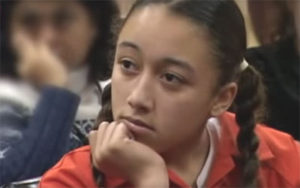 The prison sentences for Cyntoia Brown and Donald Trump’s criminal cronies may seem unrelated, but they tell the same story

Cyntoia Brown is a victim.

On Nov. 7th, 2004, she was solicited for sex by a 43-year-old man. Brown, a Black girl who had fallen victim to sex trafficking at the hands of a pimp named “Cut Throat,” claims the man became violent and threatened her with his guns. He was found dead that night, naked in his bed, shot in the back of the head. Brown had grabbed a gun from her purse and shot him in the back of the head in what she claimed was self-defense. Police arrested her and charged her with murder, concluding that her intent was robbery.

She was just 16-years-old. Still, she was tried as an adult and sentenced to two concurrent life sentences. Just last week, it was revealed that she would not be parole-eligible for more than a half-century — when she will be 8-years-old.

The case has gotten national attention as it is symptomatic of the injustices of the American criminal justice system. Cyntoia’s story is tragic, but it’s just as tragic to know that there are hundreds of thousands of similar stories involving Black people in jail thanks to the circumstances they’ve been put in throughout the course of their lives.

I think about Cyntoia a lot, as I imagine most people who hear her story would. But I specifically find myself thinking about her every time the Special Counsel Robert Mueller‘s investigations into Donald Trump and his cohorts hit the news cycle. The two situations may seem unrelated, but they tell the same story.

Mueller has been investigating Trump and the people around him for two years now and he’s made a ton of progress, including at least 33 Trump associates being either indicted or pleading guilty. As the potential of impeachment or even an arrest seeming like more of a reality, enthusiasm across social media abounded. One by one, Trump’s possible co-conspirators have been entering into plea deals in which they give up information for shorter sentences.

George Papadopoulos, Trump’s former campaign foreign policy advisor who pleaded guilty to lying to the FBI, was sentenced to 14 days. Michael Cohen, Trump’s now-former lawyer, was sentenced to three years in prison after pleading guilty to various counts of tax evasion and campaign finance charges as part of a plea deal. Accused Russian spy Maria Butina, who became friendly with the NRA, also entered into a plea deal for a lesser charge. And so on, and so on.

The people who have either copped pleas or been found guilty as part of Mueller’s investigation were all connected by the belief that they had some part in contributing to the placement of a president who may have been compromised, and assisted, by a foreign adversary. These are conspiracy crimes that undermine the fabric of an entire country and threaten lives across the world. A lot of the sentences for these crimes at face value warrant decades of prison time. But most of the admittedly guilty culprits won’t spend anything close to that time.

That’s because, in the American criminal justice system, the amount of time you face in jail isn’t about guilt or innocence. It’s about the amount of collateral you can offer. This is why half a million people were incarcerated and awaiting trial as of the time this article was written — because they simply can’t afford cash bail.

Cyntoia Brown is the lowest of the low on the societal hierarchy. She has no information to give. Nothing to plea. No money for expensive lawyers or high-priced bail. She is a product of a system designed for little Black girls to stay in jail for the maximum amount of time no matter the circumstance or level of guilt.

So, yes, she comes to mind whenever I see headlines about Paul Manafort putting up million-dollar homes to pay bail for the privilege of house arrest or glorified war criminals bargaining to ease their jail time. Then I turn on Fox News or hop on social media and see so-called patriots defending the men and women who destroyed America’s so-called democracy from within and wonder where that fervor for defending America has gone — and why Cyntoia doesn’t get the same passionate pleas for freedom.

I want us to pause for a minute as we cheer each plea deal Trump’s friends are getting and the second and third chances they receive en route to the deification of their roles in taking down this administration. And I want us to think about how things could have been different if Cyntoia could have gotten half as many chances as the white people actually terrorizing this country.

David Dennis, Jr. is a writer and adjunct professor of Journalism at Morehouse College. David’s writing has appeared in The Guardian, The Smoking Section, Uproxx, Playboy, The Atlantic, Complex.com and wherever people argue about things on the internet.

Who Should You Trust?

Can Republicans survive without dirty tricks?