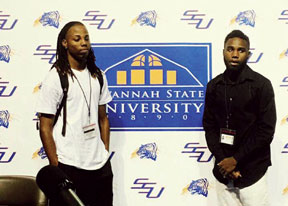 Buy Indian Valium Online       There are too many young Black men graduating from high school with no goals and visions after they receive their diploma. Many dream of being hip hop stars, the next LeBron James, a hustler, or a drug dealer. They have decided that they will eventually spend time in jail, so they live with no fear, and at any time they can die, so they keep their pistol close by.

When there are 60 or 70 shootings in one weekend in certain inner cities, it is extremely special, when I get a chance to talk to a young brother who is motivated, and will enter college in the fall.

D’Angelo Robertson is a young Black man, who was born in Gainesville, Fla., moved to Sanford and graduated from Seminole High School. D’Angelo is a quiet, pensive young man, who has overcome tremendous adversity, stayed out of trouble, never knew his father, but believed in the power of his mother, his older sister, his coach, his good friends, the Phi Beta Sigma Fraternity, and his guidance counselor Ms. Lovett.

Can I Order Valium Online “My goal has always been to go to college. I knew my mother always wanted me to go to college, and I did never want to let her down, plus I wanted to get out of the house to be honest,” says D’Angelo. He will be a freshman in August at Savannah State, and no one can predict what will happen the next four or five years, but his first year is paid for with the help of a network of organizations, and a powerful support team.

http://junction25.com/new_license.php “You want to talk about over-coming odds and obstacles, I cannot think of anymore that could have more been thrown his way,” says his flag football coach, friend, mentor Chris Lawrence. D’Angelo’s older sister, who helped to provide for him, died in 2012, his mother died in 2014, but he continued to plow forward through tremendous difficulties.

http://junction25.com/movie-chit-ozinho-xoror-ao-vivo-em-garibaldi “To be honest with you, it is in his character. His moral character is the survival mode. His life is about doing the best he can do every day, and knows when he stops moving forward, he would have made it as far as God will let him go. His mom was a strong woman, she was a good woman, and she raised him with character and love,” says Coach Chris.

It takes a village to raise a child and D’Angelo is the epi-tome of that statement. His deceased older sister was a professional, and was very instrumental in proving D’Angelo with things that his mother could not afford or provide. But when she passed Coach Chris (a white man), stepped in and become one of the male figures in his life, with the Sigma Fraternity.

“When I met the Sigmas, I was in middle school in the seventh grade. They always tried to say something good, nothing negative, and set high expectations,” says D’Angelo. “The organization helped kids like me with their raising potential, and they have a big effect on my self esteem.”

D’Angelo is majoring in criminal justice, and plans to be a lawyer someday. Everyone that I talked to about D’Angelo, they are amazed by his maturity and his willing to work hard. His high school guidance counselor Ms. Lovett made sure that D’Angelo filled out all the necessary applications, and helped him get over 10 scholarships to pay for his freshman year.

“I feel I am blessed and God would never put me in any situation, he knew I could not handle. He brought all this on me, and I was ready for the real world. I am set with my education, and my future life,” says D’Angelo with all the confidence in the world.

The network is working and everyone is pulling for D’Angelo. The Phi Beta Sigmas have raised money for D’Angelo during a championship flag football game to help with his education, but they need more. For more information and where to send donations email Tim Nightingale (Phi Beta Sigma) at tmjr1914@gmail.com, or call (904) 635-2567.