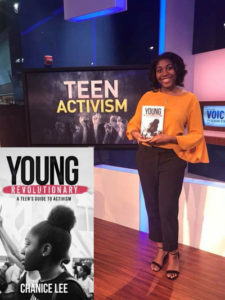 Chanice Lee of Fort Lauderdale, FL has become the “Change you want to see”, in more ways than one. Many may think that our youth are not watching us or are unaware of what’s really going on around them but, recent events have showed us that is not the case. Think about it: current teenagers have witnessed the first African-American president, and the only president they may have recognized for most of their lives (2009-2017). The instant portrayal of police brutality and increased gun violence in schools. A bit much.

However, we have seen our youth stand up at the forefront for the rights of their friends and their culture. At a young age, Chanice has been paying attention to the climate of her surroundings. “I was paying attention of what’s going on in the world. That was when the Black Lives Matter movement became popular, and I began to research ways that I could get involved”, says Lee. Lee plans to attend the Black Lives Matter Alliance of Broward –Youth Power on Monday. 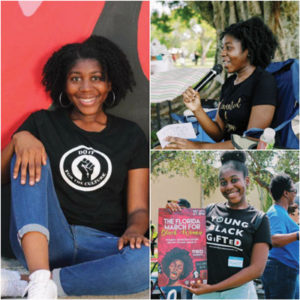 Chanice Lee is the 2017-2018 Teen Advisor along with 20 other girls from other countries, of the GirlUp campaign of the United Nations Foundation. Lee advocates, serves, and fundraise, for girls in underprivileged countries while positively impacting her local community as well.

Lee hopes that more teens will take a stand for what they believe in and inspire others to get involved. Her favorite quote is by Huey P. Newton, “The revolution is in the hands of the young. The young always inherit the revolution.” Children are the future, they have the power to impact change, and the power to demand to be heard, is what gave her the belief in that quote.

Chanice Lee is the Founder/Editor-In-Chief of The Melanin Diary, her online blog site that encourages Black teens to creatively write their views on social justice, politics, and history. Her most recent blog  related to the march held simultaneously worldwide in major cities to the recent tragedies of gun violence. In her blog she explains her decision whether or not to march stating, “As a 15-year-old Black teenager, I felt so conflicted when I was trying to decide if I should attend the March or not. I thought to myself: If the shooting happened in my low-income, Black neighborhood, would the residents of predominantly White, wealthy neighborhoods show up for Black Teens? Would they give us millions of dollars and invite us to be on national TV? Would they drive 20 miles like I did to get to Parkland for the pre-March For Our Lives Meeting to show up to a Black Lives Matter meeting? Probably not, unfortunately. That was enough for me to decide if I would go or not.”

When asked about what her advice would be to her counterparts at Marjory Stoneman Douglas High School, she offers encouragement. “Follow your passion no matter if everyone may not agree with your message. As long as you know why you are fighting for justice and fairness, that’s all that matters,” Lee states with confidence.

Lee’s mother, Deidre McClover, controls her passion about witnessing the growth of her daughter over the past few years as she explains; “I am just in awe of how brave and courageous she is, that she stands in her truth. I’ve always raised her to stand up and fight for what she believes in, I didn’t know it was going to look like this! But I support her, and I am so proud of her.”

Recently, Lee has released her book titled, Young Revolutionary, inspired by the overwhelming response to her knowledge in participating in activism. Originally, she would just write blogs about her experiences with active involvement. Then she soon realized a blog was not enough. She felt the need to go further in explaining what youths need to know when it relates to protesting for change. Her book was then created as a guide to help others learn what tools are needed to consider becoming an activist.

What’s next for Chanice Lee? Guest appearance on NBC 6 Voices with Jawan Strader, discussing future goals and aspirations. MTV’s True Life will soon be filming her for a few days to follow her actions in the community and views on gun violence. Lee is also recognized as the 2018 Young Futurist by The Root, honoring the best and brightest African Americans who are not content with letting adults determine their future.  More is yet to come from this young lady. She is definitely living up to a quote that we both love by activist Sister Angela Davis, “I’m no longer accepting the things I cannot change. I’m changing the things I cannot accept”.

Deconstructing Reconstruction in the Aftermath of Baton Rouge, Falcon Heights and Dallas

Deconstructing Reconstruction in the Aftermath of Baton Rouge, Falcon Heights and Dallas […]

Getting past the grand jury

Getting past the grand jury
[…]