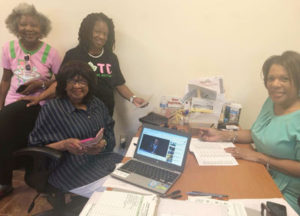 LAUDERDALE, FL – Florida Voter Mobilization Project (FVMP) is a 501 (C)3 organization whose purpose is to mobilize the voters of Broward County to Get Out The Vote (GOTV) and to educate them on the issues on the ballot. Zeta Rho Omega Chapter of Alpha Kappa Alpha Sorority, Inc. and chapter President, Soror Jeannie B. Floyd, agreed to partner with this organization to assist in achieving this goal as their mission is a major focus of Alpha Kappa Alpha Sorority, Inc.

During this period, approximately forty Zeta Rho Omega members participated in phone banking sessions in partnership with the FVMP organization. The members were also able to answer the call from our International President, Dr. Glenda Glover, to sponsor an ALL VOTE activity during the week of September 22-29, 2018. Dr. Rosalind Osgood, our 2nd Vice President, organized a schedule for members to sign-up during the ALL VOTE and FMVP dates by volunteering to make calls.

Our efforts, in conjunction with the FVMP proved to be very successful in generating one of the most exciting voters turn-outs since the 2016 Elections!