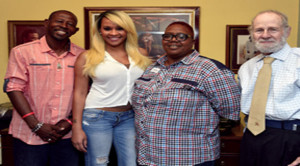 Saving Grace: Honoring unsung heroes in the war on HIV/AIDS

On Thursday, April 28, 2016, 6:30 – 9 p.m., The Westside Gazette, in partnership with World AIDS Museum and Educational Center, presents, “Saving Grace”, a new, multimedia exhibit confronting the HIV/AIDS epidemic in our community. Sponsored by Vitas Healthcare, five unsung heroes will be honored for their fight in the war on the pandemic that has spread through our community like a wild fire out of control. The opening reception will be at Old Dillard Museum, 1009 N.W. Fourth St., Fort Lauderdale, Fla. Refreshments will be served. A donation of five dollars is requested to support the Old Dillard Museum. This is the first of several events the Westside Gazette will hold in honor of the newspaper’s 45th anniversary this year.

The exhibit will include stories from filmed interviews of people positively living with HIV/AIDS (both infected and affected), photographs and stories from noted San Francisco photographer, Duane Cramer, HIV/AIDS-inspired poetry and art by local artists and writers, and a family tree illustrating the profound and far-reaching effects of HIV/AIDS on families. After the art exhibit, the reception will move to Walker Elementary, 1001 N.W. Fourth St., Fort Lauderdale, Fla., where those honored will receive their awards.

Indeed, HIV/AIDS is not an alone disease. “When we found out that my granddaughter had contracted the HIV virus, we were sad, shocked and fearful. We knew very little about this disease called AIDS. As we began listening and reading, we learned more. Later I learned that my son also had AIDS which he contracted through a blood transfusion. By this time we had adopted the attitude that it was another dreadful disease for which there was no cure. Our job was to offer love and support to our family members.

“We knew that we were not alone. This dreadful disease could touch many families across age lines, color lines, and socio-economic lines. My son later died from AIDS, and we became more determined to inform the community about the disease. We wanted to dispel the belief that AIDS would be caught by shaking hands, hugging someone with the disease or using the same restroom facilities. We knew it was important to show love to our family member and others who were fighting the disease… We wanted all to know that it wasn’t a disease that affected just African Americans and homosexuals. It is totally non-discriminatory.

“We used and continue to use our newspaper, the Westside Gazette, as a means of drawing awareness to the disease that has touched so many families in our community. In recent years, the general media as well as other interest groups have played a larger role in informing the public about AIDS.

“I am so grateful to God that we still have my grand-daughter with us. I am proud of her and how she is willing to use her time to speak to youths and others about AIDS,” stated Publisher Emeritus of the Westside Gazette, Levi Henry, Jr.

The honorees – Bessie Dennis, Patricia Fleurinord, Angela “Myammee” Pitts, Bob Hyde, and Melvin Wright – have dedicated their time, energy and passion into educating, advocating, teaching and reaching others with powerful messages on treatment, prevention, and all things HIV/AIDS. Whether infected or affected, each of these unsung heroes continuously arm us with the skills and tools we need to effectively mobilize our community against this disease. From being a voice for the voiceless to pounding the pavement to get people back into care; from social media blogs to creating a specialty license plate for HIV awareness; from providing support to penning poetry, the awardees re-fuse to give up!

Bessie Dennis is “straight outta Newark, N.J.” As a woman who came from one of the worst slums in this country at the time of her childhood, Dennis and her immediate family relocated to Fort Lauderdale, Fla. at the age of 16. As a result of facing the disparities of her childhood Dennis was always concerned with survival which motivated her to explore entrepreneurship. After 20 years of operating the first Black-owned Beauty School in Lauderdale Lakes, Bessie decided to close her doors and pursue becoming an HIV/AIDS advocate by speaking out about her own personal experience of becoming HIV infected. Her goal is to share her story at churches locally and nationwide to express the importance of putting an end to STIGMA in the Black community as well as educating and offering support to anyone infected or affected by HIV. She is currently writing a book offering natural therapies and scriptures for those living with HIV/AIDS. An Outreach Associate at Broward Health, Dennis currently looking for like minded and distinguished individuals with a passion to be a part of her vision to launch a non-profit organization in 2016 to offer awareness, education, prevention, advocacy as well as ministry and chaplaincy to the world.

Patricia Smith Fleurinord currently works at Broward House as an Intervention Case Manager for the MEGA Program. She has been working at Broward House for the last 11 years.  Born and raised in Fort Lauderdale, Fla., Fleurinord and her family have definitely been affected by HIV. She grew up and lives, worships and plays in the 33311 zip code. She is currently the Community Co-Chair for the Black Treatment Advocacy Network (BTAN, Vice Chair of the Community Empowerment Committee of Broward County’s HIV Planning Council, a member of the Broward County HIV Prevention Planning Council, a member of the High Impact Prevention Committee and recently became a board member for the Black Gay Pride Committee. Fleurinord holds a Bachelor’s Degree in Social Work and a Master’s Degree in Education. She gives GOD all the glory for her accomplishments: “Where would I be if it wasn’t for Grace and Mercy?”

Project A & M, short for Pro-ject Anna & Myammee (P.A.M), was founded by Angela “Myammee” Pitts, daughter to one of Miami-Dade County’s most recognized HIV/AIDS advocates, Anna Wyman. The tag line, “Same Purpose but Dif-ferent Generation” is what Angela has set for her organization. By bringing the same basic education her mom used, but updating it with this gene-ration by using social media, up to date information. Angela is now currently a realtor of South Florida, Miami Jackson Senior High & Florida A&M University graduate and former VH1 Reality TV star.  She received her nickname “Myammee” from the previous VH1 Reality TV shows, Flavor of Love and I Love Money. As an affected family member because of the experience she faced in her household growing up, she wants to bring everyone together – those who are infected, affected, their families and friends – to help cease HIV/AIDS. She believes that, “An Ounce of Prevention is Worth a Pound of Cure”.

At 72 years of age, Bob Hyde has been in the fight against HIV/AIDS since 1983, providing a hospice in Los Angeles for AIDS victims. Over the years, Hyde has worked and/or volunteered with numerous agencies nationwide, from attending bedsides to making quilts. He holds a BA in writing and editing, an AS in paramedics and skincare, and a CNA license, Security Guard State License, Recovery Peer Specialist and Behavioral Health Tech. Behind the scenes, Bob was instrumental in assisting both Elder George Gibson and Dr. Hansel Tookes of University of Miami Jackson Memorial Hospital, with a needle exchange program in South Florida. Today, he is working to establish a support group to control obsessive compulsive behavior in the HIV/AIDS health crisis.

Melvin Wright is a lifetime resident of Broward County. He grew up with strong family values and a willing compassion to help others. After losing four family members to HIV/AIDS, the vision to help and educate the community became clear to Melvin. He began walking for HIV/AIDS in 2000. In 2014, Be A Champion for AIDS/HIV was formed. His mission is to educate and provide assistance to all people regarding HIV/AIDS. Most importantly, he emphasizes the importance of prevention and getting tested. His father, best friend and hero, Willie C. Wright Sr., was the center of Melvin’s inspiration. Melvin is working to start a foundation to help children go to college who came in contact with this disease.

Born on May 11, 1906, Richard Arvin Overton, a member of what is often called America’s “Greatest Generation,” died on December 27th in Austin, Texas. At 112 years and 230 days, Overton was believed to be the oldest living man in the United States as well as America’s oldest veteran.  […]

“Let’s pause here to give a little credit where credit is due. Freeing 17 prisoners – all of whom were serving life sentences without parole – is impressive and commendable and the result of a campaign – 90 Days of Freedom – launched by Kardashian’s attorney, Brittany K. Barnett, a Black woman,” Anne Branigin wrote for The Grapevine.  The Decarceration Collective’s MiAngel Cody, another Black female lawyer, also collaborated on the project. “If we wanted to go back even further, it’s worth knowing the viral Mic video on Alice Marie Johnson that moved Kardashian to act was facilitated by – you guessed it – a Black woman, Topeka Sam,” Branigin said. […]

‘Your body is a weapon against Satan’

‘Your body is a weapon against Satan’