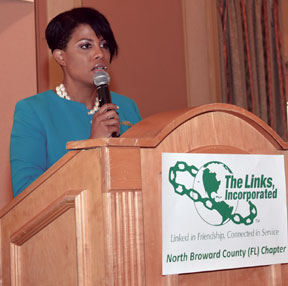 “I was raised by two scholars with the love for service in their DNA,” said Mayor Rawlings-Blake. “They did not expect excuses. They taught me not to be apologetic – that I could be a wife, a mother and have a career. . . my life was built on the expectation of academic success, high moral standards, and civic responsibility.”

In an exquisite demonstration of how faith and principles guide a high caliber life, Baltimore Mayor Stephanie Rawlings-Blake poured out love and affirmation to the North Broward County Chapter of the Links, Incorporated, and their guests at their 20th Annual Luncheon Oct. 10. While she may rightly have been expected to address the violence and oppression of Black Americans revealed in her city over the past year and her recent decision not to run for a second term, the poised and beautiful mayor instead underscored the Links’ theme, “Embracing Our Legacy, Fulfilling Our Promise” with a recounting of her formative experiences.

“The way we got here is the way we’re going to get there,” Mayor Rawlings-Blake told the service oriented Links. “We have a strong foundation. We have to continue with tenacity, insist on hard work and keep our expectations high. Just as we reach back to our ancestors for our fundamental legacy, so we must reach forward to our children and leave them a legacy.”

Mayor Rawlings-Blake laid out her own legacy growing up in a family committed to public service. Her father Howard P. Rawlings served in the Maryland House of Delegate from 1979-2003, and chaired the powerful Appropriations Committee from 1992 to 2003. Her mother Nina is a pediatrician.

“I was raised by two scholars with the love for service in their DNA,” said Mayor Rawlings-Blake in her Keynote address at the Diplomat Golf and Tennis Resort in Hallandale.  “They did not expect excuses. They taught me not to be apologetic – that I could be a wife, a mother and have a career. . . my life was built on the expectation of academic success, high moral standards, and civic responsibility.”

The Mayor is carrying that legacy forward with a record of accomplishment that is stunning for someone so youthful.

Her accomplishments in the brief bio in the program showed a veritable manifestation of the principles she espouses: The youngest person ever elected to the Baltimore City Council (at age 25, 1995), her dedication to public service won her 87-percent of the vote in the Mayoral elections of 2011. Among the esteemed US National Conference of Mayors (USNCM) serving more than 80 percent of all American citizens, Mayor Rawlings-Blake was swiftly chosen by her colleagues in 2015 to be their President. She was elected Secretary of the Democratic National Committee following President Obama’s re-election.

Mayor Rawlings-Blake, who says she has chosen not to run again in favor of focusing on rebuilding her city,  reminded her sister Links that service isn’t just about what we do now, but it’s the legacy we are creating for the future. The Mayor has said she made the difficult decision not to run because “every moment I spend planning for a campaign or re-election is time I’m taking away from my cur-rent responsibilities to the city that I love.”

In a brief private interview which the Mayor graciously gave to the Westside Gazette following her presentation, I thanked her for highlighting our responsibilities to future generations and asked what Baltimore is doing to prepare for impacts from climate change. The City in the Chesapeake Bay watershed is as vulnerable to flooding and displacement from rising sea levels as Fort Lauderdale on the shores of the Atlantic Ocean.

Her eyes lit up with interest as she described how her administration developed their  Climate Action Plan issued in 2013, which calls for “more intelligent land use, energy- and water-efficient buildings, lower carbon transportation choices, improved waste management, and more responsible consumption behaviors” among other strategies to reduce destructive greenhouse gases. She said that because the plan was developed with participation of community members as well as city and state agencies, utility companies and others, it is widely accepted across sectors.

“It’s not difficult to communicate something when you’re talking peer to peer, with someone you know and trust,” said the Mayor.

Asked what her priorities are as president of the National Council of Mayors, Mayor Rawlings- Blake pointed to a focus on investment in education and workforce development; public safety, infrastructure, healthcare, and protecting our air and water. The issues are part of the “Mayors Compact for a Better America,” which the USNCM presented to Presidential candidates and Congress at a press conference earlier this month.

A week before meeting Mayor Rawlings-Blake I had the opportunity to meet and converse with the renowned scientist and Pulitzer Prize winner E.O. Wilson, 86, whose pioneering work in the field of sociobiology has changed the world’s understanding of man’s relationship to nature. The opportunity to learn about Mayor Rawlings-Blake, 45, and experience her brilliance, poise, charm and warmth put those two events on par. It gives me hope that her accomplishments in the field of governance and leadership can help transform our society into a more equitable, just and sustainable nation.

Kudos to the North Broward County Chapter of the Links who expanded their legacy of inspiration in South Florida by bringing their esteemed Link sister here!

CORRECTION: More than 600 Blacks killed in justifiable homicides since 2008

Black victims accounted for nearly 60 percent of the justifiable homicides committed with firearms in the United States between 2008 and 2012, according to a new report by the Violence Policy Center. […]

A New Generation of Freedom Fighters […]