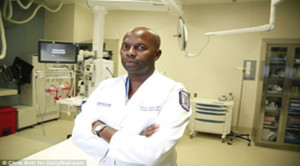 Dr. Brian Williams, a 47-year-old trauma surgeon in Dallas, made headlines in the news in the wake of the horrific Dallas shootings last week as one of the physicians who treated the police officers wounded. In addition to treating the officers, he made an emotional and tearful speech during a nationwide broadcast in Parkland.

“This killing, it has to stop. Black men dying, it has to stop,” Williams said, before denouncing the shooting and saying that it was the duty of people of all races to come together and stop events like this from happening. But even in the midst of this plea, The Daily Mail reports that Williams felt a sense of conflict from his own experiences as a Black man in America, particularly with police.

Many of these experiences, stemming from routine traffic stops, reveal an inherent fear of law enforcement that has developed.

“My experiences they go back decades, one after the other, they become internalized,” he explained.

“And it’s a combination of my own experiences and an oral history I receive from my friends and family members that have gone through the same thing, we don’t just make this up, this happens. I remember running a red light when I was in the Air Force. I was in civilian clothes and I was pulled over and the officer made me get out and I was spread-eagle and made to put my hands on the hood of the car.

Most other people just get to sit in their car. I definitely did wrong, but it was a minor traffic thing, it didn’t merit the response.”

Williams explained that these experiences, combined with the wake of police shootings of Black men, made him “fear for his safety.” At the same time, though, he notes that police never used racist or pejorative language towards him, and doesn’t want to blame individual officers, many of whom he considers to be colleagues and friends. In-stead, he believes this climate of fear is indicative of a larger problem.

“There are systemic issues of racism that exist in this country that are not being addressed appropriately,” he says. “I don’t know that we can fix everything but we can certainly have an open discussion and acknowledge that, yes this does exist.”

An answer for Confederate apologists

An answer for Confederate apologists
[…]